Still in Kassel, at least mentally. The bad news first: Michael Kimmelman’s embarassing writeup of Documenta 11 in todays NYTimes is not only self-contradictory, but almost every complaint or criticism he makes of the show can be refuted by the contents of the show itself.

Maybe it’s telling that we approached the show from different angles, literally. He arrived via Cologne, where the Matthew Barney show just opened, and so he supposes that Barney’s work is “just what Documenta 11 is reacting against but could do with a little more of.” I, in the mean time, came via Basel, the world’s biggest contemporary art fair, where the hottest souvenir turned out to be the “I Survived Cremaster 3” T-shirts, which were handed out surreptiously (at first) among the hubris-weary dealers and consumers.
While I do agree with one of Kimmelman’s statements– “It leaves me edified and a little sad” –I doubt we’re sad about the same thing. He lamented “didactic” overly serious, homogeneity and an indifference to “art.” But there were beautiful, moving works that spoke (both directly and obliquely) to injustice, hatred, violence, decay, abuse of power, and any number of important problems facing the world (go ahead, zoom in, and say they face the west, the east, the country, the city). As Documenta 11 makes a very persuasive argument that art can and does matter to the world outside a museum or a gallery, Kimmelman, inexplicably, seems to be pining for irrelevance and overwhelming self-referentiality. There’s a time for that: it’s called 1999. 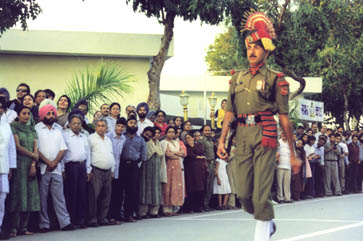 Now the good news: One of those works is Amar Kanwar’s 1998 documentary, A Season Outside. It begins with scenes of the bizarrely ritualized gate-closing ceremony that takes place at the Kashmiri border of India and Pakistan. Citizens of each country cheer on their own soldiers, who high-step and prance agressively like armed peacocks. Literally, each step a guard makes is matched by the his counterpart, a ridiculous, bravado-blind tit-for-tat that prefigures the blustery statements politicians are making today. It’s breakdancing, but with nuclear missiles. The filmmaker’s voiceover describes a feeling of inevitability and impending disaster, and the crowd of men onscren turn out to be wagering on a pair of rams repeatedly set loose to butt heads.
Refusing either pessimism or cynicism, Kanwar poetically explores the philosophy of nonviolence, even as covert video shows gangs of Chinese soldiers clubbing Tibetan monks. When Kanwar asks a monk if all the injustice they face doesn’t demand a forceful response, the monk replies, “whatever be the way, I must not return pain for pain, evil for evil.” Here’s a work made five years ago that directly speaks to the greatest threat to the world at this very moment and that presciently implicates the exact word George Bush wields as his religio-political sword. The more I remember it, the more impressed I become with A Season Outside, the sadder I become for the current total absence of nonviolence as an element of the debate in the US, and the more I feel that art could play a powerful role in shifting that debate.
[Here is an early review from FAZ.net (in German). Run the URL through Babelfish for a rough translation. Excerpt: “Amar Kanwar’s contribution lives on hinreissenden [ravishing, I think] pictures, detailed observations and a melancholy, which seek to mediate between past and future.” ]