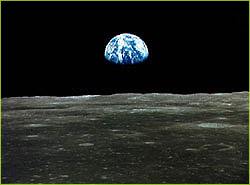 Had a man been always in one of the stars, or confined to the body of the flaming sun, or surrounded with nothing but pure ether, at vast and prodigious distances from the Earth, acquainted with nothing but the azure sky and face of heaven, little could he dream of any treasures hidden in that azure veil afar off.
– Thomas Traherne, The Celestial Stranger, mid 17-th c.

Effusively compared in this Guardian article to the Apollo astronauts’ first views of the earth from space, Christian mystic Thomas Traherne’s writing “can turn your understanding inside out, thrill, surprise and exhaust you” with his revelatory view of the world.
This is a review of Ronald Weber’s 1986 book, Seeing Space: Literary Responses to Space Exploration (Amazon Sales Rank: 2.2 million. Let’s help the guy out.) which wonderfully uses the last line of Thoreau’s Walden to identify the greatest impact of space travel: ” ‘Our voyaging is only greatcircle sailing.’ This is to say that the most important aspect of our travels, whether inward or outward, is that they bring us back to our point of departure with a new appreciation of that beginning place.”
Norman Mailer begins with a complaint that the whole space thing is closed to him: since he can’t talk the techno talk or get inside those astronauts’ heads, all he can do is watch dumbly “from the visitors’ bleachers.” He has an epiphany at the crassly commercialized Plymouth Rock (where only “an immense quadrangle of motel” marks the hallowed spot), and sees the Moon Rock anew. The whole adventure represents “the…reawakening of an older and non- mechanical view of life, one in which we are brought to ‘regard the world once again as poets, behold it as savages.”‘
These ecstasy-riven testimonies– utterly self-contained, yet reaching out to (potentially) affect us all, something we must accept in imperfect transmitted form (unless you’re John Glenn or Lance Bass. Actually, being Lance Bass doesn’t do any good, either.)–may help in understanding Matthew Barney’s Cremaster Cycle.
This seriously ecstatic Guardian review (What IS in that tea, fellas?) attempts to affix Barney’s work in the heavens. It is an omniscient, mysterious creation myth, ultimately incomprehensible to mere mortals. It is at once “dense,” “rich yet fragile,” “of our time,” and “aspiring to be eternal.”
Like the “great American novels” (Moby Dick and Gravity’s Rainbow are mentioned), Cremaster embodies the “desire to reawaken the language and imagery of ancient, organic patterns of thought [which is] central to modern American art and literature.” Heady stuff. And there’s Norman Mailer again, right in the thick of things, starring as Harry Houdini in Cremaster 2 (the most successful of the series, IMHO). But for all the praise and allusion heaped on it, does Cremaster take us “greatcircle sailing?” What does it say about the place we return to after seeing it?
In Artforum, Daniel Birnbaum argues that “no one makes a stronger case than Matthew Barney for visual art today.”
All that the world most needs today is combined in the most seductive way in his art: Barney’s work is brutal and highly artificial, as Nietzsche came to think Wagner’s was, yet it also offers up the pure joy of the beautiful–which is, I think, not unrelated to what Nietzsche meant by “innocence.”
Whatever Barney’s goal, his achievement is notable. But at what price? Buzz Aldrin wrote candidly of his most significant challenge: dealing with life after returning from the moon. His goal accomplished, his life suddenly lacking direction, his marriage unravelling, he grew frustrated that “there is no experience to match that of walking on the Moon.” For Barney’s sake, I hope he doesn’t mimic Aldrin too closely, cursing his own hairy moon on the screen, “You son of a bitch, you’re the one that got me in all this trouble.”