Editing, here I come. I finished logging and capturing all the footage I’ll use in S(J03); it seems like it’ll be tough to get it down to 5-6 minutes. The last tape I captured was all the ironing (three white dress shirts’ worth). As I mentioned before, the third shirt has such great, engaged shots, it almost doesn’t make sense to use anything else. The result: I’m going to try two different editing “tones.” For the ironing scenes, there’ll be long, continuous takes, maybe with a few dissolves; the car and cleaners scenes will have quicker cuts, jump cuts, a slightly more dynamic feel. That’s the plan, anyway. I start tomorrow (Sunday). ND/NF deadline is four days away. 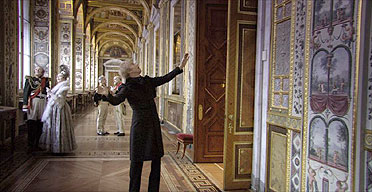 Russian Ark, dir. by Aleksandr Sokurov
image: guardian.co.uk
We just got home from seeing Russian Ark, the single-take epic poem of Russian history directed by Aleksandr Sokurov. It was quite stunning for a while, then normal, then stunning again at the end. The Hermitage itself is the real star. Even without the tour de force (or gimmick, depending on your cynicism) of shooting with no edits, the film’s exploration of the centuries of momentous people and events witnessed by the building would be worth seeing. The insane staging (the credits list six stage managers and twenty assistants) required to pull the thing off in one 96-minute shot is just a layer of gold leaf on the film. And as the Hermitage demonstrates, everything’s better with gold leaf.
The impact and resonance of the continuous Steadicam/tracking shot seems to be changing, though. I have a theory, which I’ll try to expand on later, that the emergence of first-person shooter (FPS) video games is changing the meaning of the visual vocabulary for both film and games. When I play a Vice City for an hour, it’s a continuous take, visually, even if it’s not as bravura as Sokurov’s, Welles’, or Scorsese’s.
Comparing the edits in classic movie musicals (3 or 4 per number) to, say, Moulin Rouge (120 per minute in some songs), it’s clear that the meaning/significance of the long take has changed before. Technology is changing it once again.
Some links I’d start with: Machinima.com, turning “first person shooter” into “first person cinematographer.” A broad article at Polygonweb about cinema-game influences. Game Research briefly discusses point-of-view in games and film.