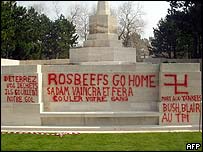 From a BBC report: Protestors spray painted anti-war grafitti at Etaples in Northern France, the largest British WWI memorial cemetery in the country.
What it said (in order of increasing shock and awe) “Sadaam will win and spill your blood,” “Death to Yankees (swastika included),” “Bush, Blair to the TPI [International Court of Justice],” “Rosbeefs [what the French call Brits when they hear ‘frog’] Go Home,” and “Disinterr your trash, it contaminates our soil.” The French are suitably pissed, as are the British. [thanks, Buzz.]
“”Had the public been able to see live coverage from the [first world war] trenches, I wonder for how long the governments of Asquith and Lloyd George could have maintained the war effort. Imagine the carnage of the Somme on Sky and BBC News 24.”
— Jack Straw, British Foreign Minister in the the Guardian. Read the full text. Remember that nothing remotely Somme-like has been seen on western TV.
See the Silent Cities site for the Etaples Military Cemetery. The Commonwealth War Graves Commission, which administers Etaple (and Thiepval, the memorial at the Somme which was the object of Souvenir (November 2001)).