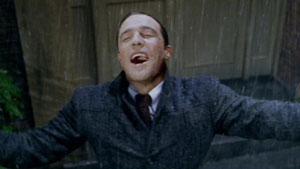 After the initial surge of self-righteous outrage-alin subsided in my veins, I decided that this British VW commercial that re-animates Gene Kelly in order to have him Breakdance In The Rain is, in fact, a rather brilliant tribute and an awesome piece of work.
Someday, we’ll all need to think about who makes decisions about who gets to decide how and when our content and likeness will be used after we’re dead. Kelly got lucky here; you wouldn’t (would you??) want heirs like Samuel Beckett’s, whose fundamentalist dictums foreclose any possible future innovations. Of course, you wouldn’t want Fred Astaire’s heirs, either, who sold him out to a freakin’ vacuum commercial, or MLK’s, who pimped one of the most important speeches of the 20th century to a phone company that probably doesn’t even exist anymore.
No, you’d want–ok, I’d want–to come up with a committee of sorts, a group that self-perpetuates, with a diverse enough membership that stays able to judge the current context, and position dead-me in it an innovative, relevant, and reputation/”brand”-enhancing way.

Who knows, the people I designate–and the types of people they’re replaced with; I wouldn’t want my committee to ossify or to get hijacked/blockaded by any one generation–might even make better career choices for me after I’m dead than I make while I’m still here. After all, Gene Kelly’s last dancing movie was the hapless Olivia Newton-John rollerdisco musical, Xanadu [here’s the DVD].
VW GTi, Gene Kelly – Singin’ In The Rain (60s) [DavidReviews.com via nathanpitman.com via waxy.org]
A generous and funny Xanadu synopsis [coolcinematrash.com]
Previously:
A Pile of Rubble Topped by Nudes. Now That’s a Musical!
[Update: Holy crap, Xanadu was the first feature film of Robert Greenwald, who directed Outfoxed: Rupert Murdoch’s War On Journalism and Uncovered: The Whole Truth About The Iraq War]
[On the other hand: Wayne Bremser–he of the Matthew Barney vs Donkey Kong fame–sends me to the showers thus:

I disagree with you, Greg. The first thing that stands out is that the music isn’t “breakdance” music at all – it’s bad generic euro dance music. They should have done a mash up of something, would have been more interesting and perhaps there is something related to “rain” that would have been more interesting.
While I don’t think this scene is sacred, I do think there is something perverse about manipulating Gene Kelly to look like a much worse dancer than he was. It’s not that bad at the end when the camera is not so close, and they don’t have to maintain the illusion of his head, but the rest of it, the way they have manipulated the head to always look at the camera, it looks like Jim Carrey doing a dance while trying to keep up a wacky face.
With the wealth of original homegrown media mashups online (i.e. Planet of Apes remixed as a Twlight Zone episode), a commercial like this seems amateur in concept and style (perhaps more polished, but certainly amateurs would use better music).

I DID totally call it on Xanadu, though. – g.o]