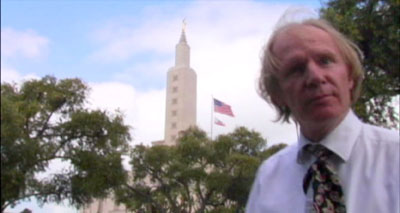 There was a Church film in the 70’s that showed what happens when you don’t do your home teaching. Mike Farrell (the BJ-Hunniccutt-on-M*A*S*H guy) played an auto mechanic/Mormon bishop, who asks a young, career-focused lawyer in his congregation to be a home teacher to a troubled family where the father was becoming less active in the Church. Time goes by, the lawyer’s busy and can’t ever find the time to visit the family each month and check in on their spiritual well-being. One evening, he gets a distraught phone call from Sister Brown: her husband’s gone, fed up, the last straw, and now they’re getting a divorce. “Is there anything I can do to help?” the lawyer asks, which sets the wife up to drive the film’s message home: “There was probably a time when you could have done something, but now it’s too late.”
Greg Whiteley’s first film, N.Y. Doll, on the other hand, is a testament to the blessings that can come from doing your home teaching. Not only does your home teachee get his band back together after 30 years, your first film gets a raucous reception at Sundance.
When Whiteley was assigned to be fellow Los Angeles ward member Arthur Kane’s home teacher, all he really knew was that the middle-aged Kane was a quiet, seemingly rootless reformed alcoholic who’d been in a band as a kid, long before he joined the Church.
Typically, home teaching takes the form of short, friendly, monthly visits, where you read a verse or two, share a prepared inspirational message from church leaders, and ask, slightly awkwardly, “Is there anything we can do for you?” And every once in a while, you help someone move.
Arthur Kane’s home teachers, including Whiteley and the guy before him, who’s interviewed in the movie, clearly magnified their callings. They gave Arthur money to get his prized bass guitar out of hock. Whiteley started videotaping Kane, making him the star of a film which, at the time, had no story and no prospects; all the big, archetypal plotpoints that occur in NY Doll–the Dolls reunion, the intervention of Morrissey, Kane’s illness–only happened after filming had begun.
[At least that’s how it appears. Most of the footage in the film appears to have been shot in small, intense bursts, even single sittings: Kane on the bus, at the Family History Center, the NYC reunion/rehearsal, picking up all the rock legend interviews backstage at the Meltdown 2004 performance in London. It’s entirely possible that N.Y. Doll started out as a favor from a filmmaker, to help a friend tape his conversion story and his colorful personal history.]
In any case, NY Doll deftly and sensitively navigates two, even three paths as it tells Kane’s tale: there’s the VH1-style “where are they now?”/reunion rockumentary; the tearjerking, feel-good “grant a wish” by-the-book PBS special; and–and I don’t imagine many people, Mormon or not, will spot this–a matter-of-fact lesson in the exercise of religious faith.
While the NY preview audience [heathen journalists all] I saw the film with tittered at the mention of answered prayers, miracles, and Kane’s explanation of how the Holy Spirit revealed The Book of Mormon’s truthfulness to him [“it’s like an acid trip from the Lord”], that kind of experience and language will seem utterly commonplace to LDS audiences. So much so, that it may go unnoticed; but Whiteley’s ability to document LDS religious doctrine and sentiment without resorting to either media-outsidery cynicism or church-insidery didacticism is such a rare achievement, I’m tempted to call it a miracle. He that hath ears, let him hear, I guess. 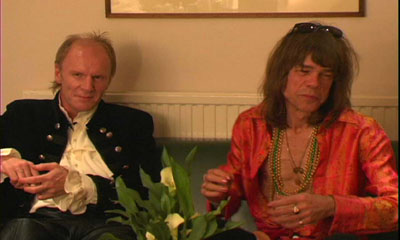 The film’s arcs aren’t perfect, however, just the best they got on tape; I would have liked some more from Kane on the breakup and supposed bad blood that kept him and Doll lead singer David Johansen apart for 30 years. This reconciliation/making amends thread is pegged by his bishop–and by Kane himself–as the real dream-come-true; it’s the “right” answer, Jesus-wise, but in retrospect, it didn’t feel supported by the reunion buildup. And Kane’s Family History Center co-workers could have been a little less cute-ified [“Q: you could be groupies! A: hee hee”]. But these are quibbles, really.
The moments of real emotion that Kane fans like Bob Geldof, Morrissey, and that one critic chick…sorry, Love…evince, and the patience/tolerance/goodwill/what-have-you when Kane leads the band in a pre-performance prayer are incredibly touching. Especially considering how obviously out of touch Kane could be [his Joseph Smith-inspired stage costume was called a pirate outfit by one person backstage]. If anyone spoke ill of his subject, Whiteley’s heart was too full of charity to include it.
In the production notes, the filmmakers asked reviewers not to talk about the ending, so instead, I’ll talk about the end of the ending credits. That is where I and one other guy who stayed were rewarded with one of the most inspired musical mashups ever: an unplugged rendition of the archetypal Mormon hymn, the dirge-like “A Poor Wayfaring Man Of Grief,”–a favorite of both Kane and Joseph Smith–sung by NY Doll David Johansen in his hard-lifeworn, gravelly, and heartfelt voice. It’s no cover of the Nine Inch Nails’ “Hurt,” but don’t we all fall short of the glory of Johnny Cash?
It’s a generous gift from Johansen to his once-estranged bandmate, all the more so because it’s so utterly unexpected. This is one pearl of great price that I hope someone will rip and get into wider circulation immediately.
N.Y. Doll opens today in New York (at the Angelika) and Los Angeles. See the New York Doll website for more info and release schedules. [newyorkdollmovie.com]
Is There Life After Rock ‘n’ Roll? [stephen holden’s nyt review]
previously: Oh My Heck! Brother Greg Whiteley’s NY Doll