Even when I worked for The Mouse, I cringed and laughed at the pile-up mash-ups of corporate life and pop culture. On the rarest occasions, like with Atomic Revolution, the nuclear propaganda comic book produced by adman M. Philip Copp for his Connecticut yacht club buddies at General Dynamics can actually be a powerful, if overlooked work of art. Mostly, they’re kitschy train wrecks, though, like the commissioned corporate musicals and company anthems for the likes of KPMG. 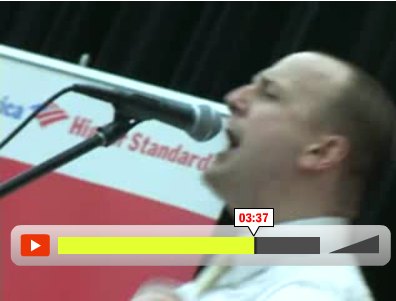 Because the genre’s signal-to-noise ratio is so low, I avoided watching “One Bank,” the video making the rounds this week where some Bank of America execs turned U2’s “One Love” into a celebration of BofA’s merger with credit card giant MBNA. Known quantity, I figured.
[Forget for a moment that uncompromising rock artists–Bono included–have been dogpiling onto the corporate moneywagon for years now. Suggs and his mates from Madness, for example, know better than to show their sellout faces around my house after allowing Maxwell House frickin’ Coffee to desecrate the anthem of my youth.]
But Andy‘s description, “painful to watch in its sincerity,” lured me in. [He really is a master of the <10 word write-up.] It's really amazing to watch, precisely because of the balls-out sincerity. That, and the dude's not actually a bad singer; sincerity you can fake, but the guy has chops. I decided the appropriately bemused thing to do was to keep my eye out for him at BofA locations in Manhattan, and when I saw him stepping out for a smoke, I'd give him the "Are you Ethan Chandler??!” high five that a true Internet celebrity deserves.
But a quick Google search flipped my telescope around completely. Turns out the guy had some songs and and an EP published by EMI in the 1990’s; he fronted a cover band that played gigs around the Northeast; and he put out a CD in 2002. Ethan Chandler isn’t a banker who thinks he’s a musician; he’s a musician whose dayjob is in a bank.
As a finance industry survivor who’s wrestled for years with how to balance making a living and pursuing a passion, I’ve gotta give Chandler props for trying to bridge his two seemingly incompatible worlds. If you see Chandler at the bank, meanwhile, give him a high five for me.
Buy Ethan Chandler’s presciently titled 2002 CD, “Better Days Ahead” [awarestore.com]