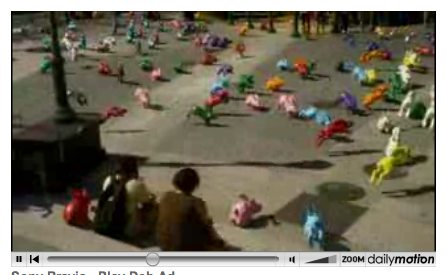 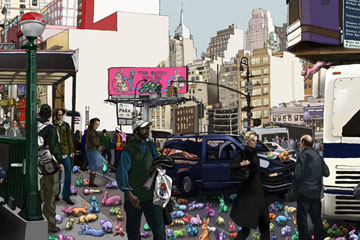 Whoa, so it turns out that Sony’s new Bravia ad full of city-hopping bunnies [top] is a ripoff of the LA-based design team kozyndan.
According to Core77, Sony’s commercial production company Passion Pictures had invited kozyndan to present their portfolio which, in addition to the bunnyscape panorama USA-chan [detail above], also included Uprisings, their Hokusai-inspired wave of bunnies. After receiving the materials, the agency never called the designers back.
[Dumb-ass smart-alecks like 95% of the commenters on Gizmodo take note: there is a substantive economic and ethical difference between kozyndan openly referencing a centuries-old, famous work of art by a long-dead artist and an ad agency taking tens of millions of dollars from a client for creative concepts and work it solicited privately from independent artists, and then used without either credit or compensation.]
This also seems like a good time to point out that Sony’s agencies appear to have a problem with this. The idea of the first big Bravia ad, the one with 250,000 bouncy balls let loose on the street, was originally exhibited in Canada and the UK by the Canadian artist Lucy Pullen .
[Not that Sony’s alone in this ripoffery. Apple was in touch with artist Christian Marclay to use his 1995 piece, Telephones, for the first iPhone commercial that ran during the Academy Awards. Marclay finally refused, but Apple went ahead anyway.]
Will the Real Bunnies Please Stand Up? [core77]