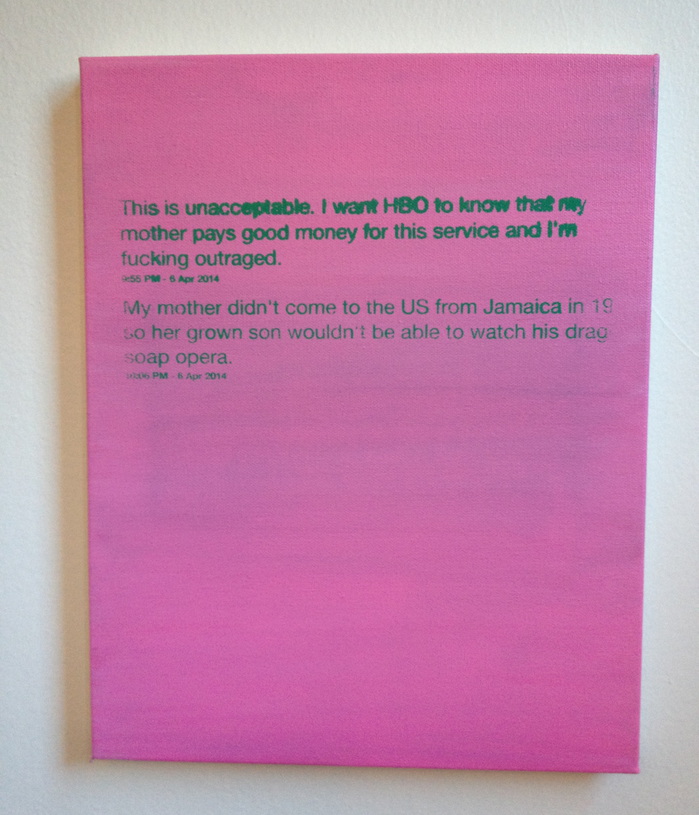 Although these paintings initially seem straightforwardly banal, at second glance their neutrality becomes more difficult to decipher. The viewer laughs but then perhaps questions how he reacted. The underlying tension to each of these tweets seems awkwardly dated to 2014 middle class America. @TheRealHennessy Tweet Paintings‘ tweets explore forces of sexual identity, and social acceptance revealing a dark underside. Many of the other tweets in the series leave the viewer in similar states of disbelief. greg.org deconstructs and examines the authenticity of the author, masculinity and his own identity. He is concerned with our fascination, fetishization, and acceptance of the image of social media. Chameleon-like, he changes from a consumer to a writer, and now artist.
Artists were casting sculptures in bronze, making huge paintings, talking about prices and clothes and cars and spending vast amounts of money. So I silkscreened jokes on little canvases and sold them for $1800 each. I have never thought making anything new. I make it again. I am very much against trying to make anything new in a modernist approach. I think you can do only something for yourself.
The true meaning of the @TheRealHennessy Tweet Paintings is still a matter of discussion. From a distance, they could even be read as abstract works. But viewed closely, their formal simplicity and their repetition seem to set them in the tradition of conceptualism. All in all, greg.org’s works are loaded with references to Structuralism and Post-modernist theories. Repetition deprives the tweet of its humour thus reducing it to a mere text in which the signifier takes over on the signified. After this, what is left?