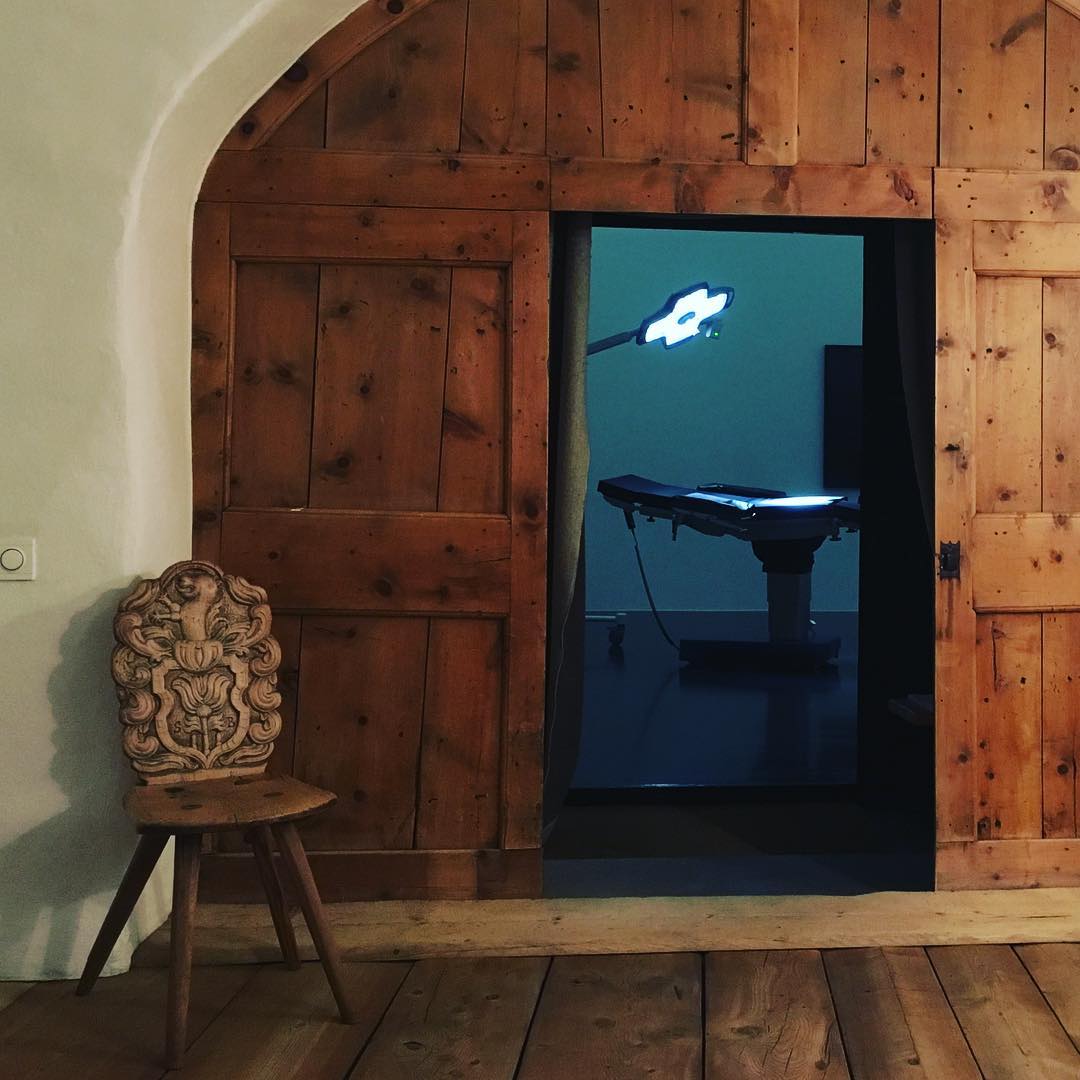 Superflex, Hospital Equipment, 2014- , von Bartha S-chanf installation shot via ig/superflexjakob
“Sometimes context is everything,” SUPERFLEX’s Jakob Fenger wrote, as he Instagrammed a photo of the latest installation of Hospital Equipment in von Bartha’s hyper-rustic gallery in the Swiss skiing village of S-chanf. [pronounced as it’s spelled, it turns out.]
The Danish collaborative calls Hospital Equipment a “readymade upside down,” because it pulls objects into an art context, only to send them on their way to a new context, as functional objects. The objects are surgical tables and operating room equipment, and their post-readymade destination is a hospital in a Middle East conflict zone. The first iteration of Hospital Equipment in 2014-16 was realized at a hospital in Gaza. This time, the work will be realized in Syria.
Collectors of the $90,000 work–Superflex calls their things tools rather than artworks or projects–receive a photo and a certificate for the privilege [sic, which] of funding the object’s purchase, travel, and installation in a place where it’s actually, not just symbolically useful. 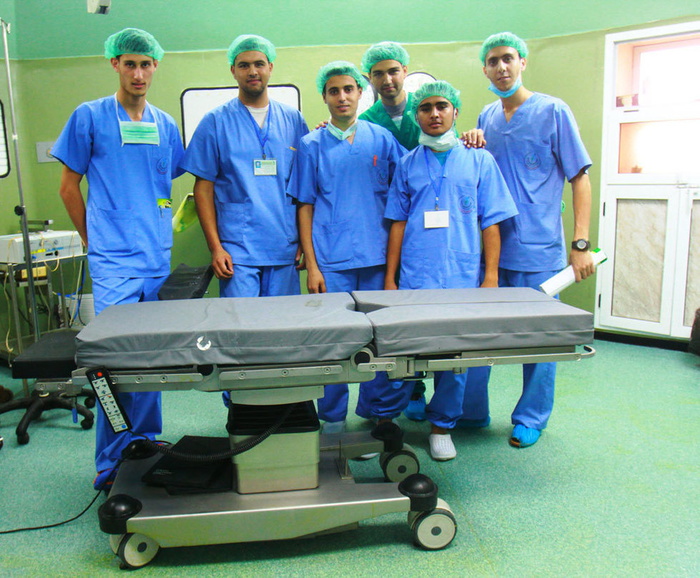 The work questions not only our divergent reaction to the heavy stream of media and humanitarian fundraising campaigns involving the Syrian conflict, it also challenges the concept of contemporary art practice, collections and ownership. SUPERFLEX refers to the work as a ‘readymade upside down’. Transitioning from a Duchampian ‘readymade’ to a potentially lifesaving medical instrument, the equipment oscillates between artwork and functional object, highlighting the role of context in the definition of artistic practice – and the will of the individual mind to make direct change in the world we are living. The equipment consists of a state-of-the-art surgeon’s table, a mobile surgery lamp and a surgical instrument table, that has been carefully selected for the Salamieh hospital. Hospital Equipment is an act of exchange.

“We want to challenge collecting itself. Do you have to have the object, or can it be just as valuable to you that it be activated somewhere else?” said Bjørnstjerne Christiansen last year. 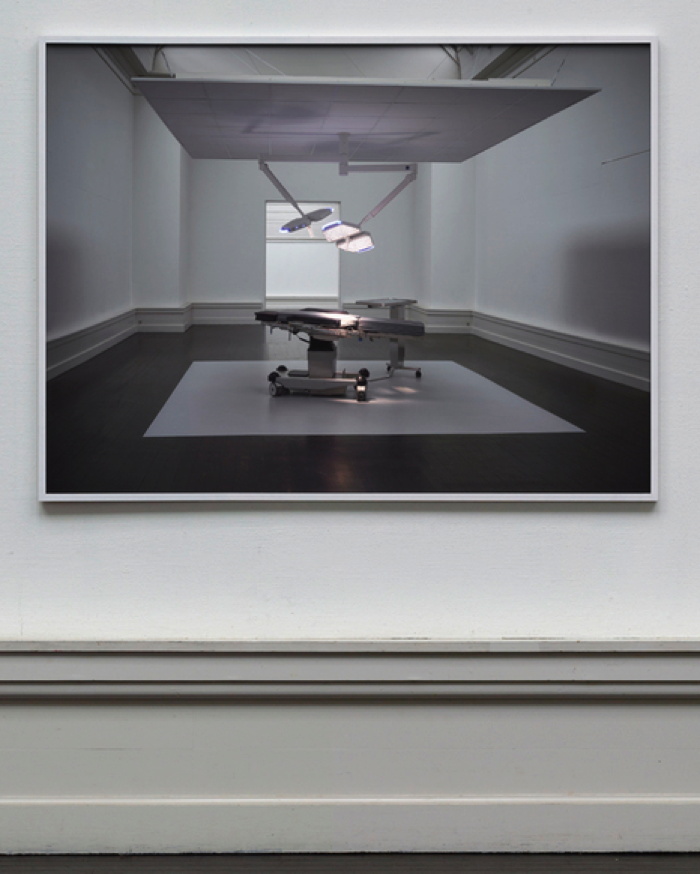 Superflex Hospital Equipment, 2014- , installation shot of the photo of the installation at den Frie, Copenhagen. image: superflex
For some objects like operating tables, and some places like much-covered conflict zones in which your own society is somewhat implicated, there is value in knowing that your effort or expenditure helped activate something somewhere else. But a photo is an object. A COA is a marker of value. The art world is a context that confers that value. Engagement with art as a maker, seller, and collector also confers social value. Let’s acknowledge that but continue to consider the questions Superflex is raising. But, “Is the money spent on an art object better spent somewhere else?” ends the exercise too quickly.
Given Superflex’s constellation of privilege, money, access, attention, prestige, moral authority, relationships, aesthetics, entrepreneurialism and relationships, and the particulars of the platform and situation they faced in 2014, what is an appropriate response?
Because in 2014 Superflex was awarded the Carl Nielsen og Anne Marie Carl-Nielsens Legat, a biennial prize for Danish sculptors which includes an exhibition at Den Frie Centre in Copenhagen, and a prize of 600,000 kronor (then $US105,000.)
Superflex realized Hospital Equipment in collaboration with PalMed, a EU-based NGO for Middle Eastern doctors, who helped pick the equipment and identify and coordinate with the hospital; the WHO, who helped with logistics; and a Danish training tech firm called Area9, whose founder was the only collector of three to be publicly identified. Thus through the jiu jutsu of the readymade, the transformation of an operating table into an art object and back again is incidental to the leveraging of art capital and its trappings for international humanitarian philanthropy.
And now it is happening again, this time with Syria. And a private gallery on the road to Gstaad. Will the media streams and aesthetic impulses and capital flows align again so that Superflex can make some more direct change in the world? I guess we all hope so.
But the financial and logistical convolutions involved in Hospital Equipment strike me as an inefficient and ultimately unsustainable way to meet real medical needs. They’re the geopolitical conflict equivalent of Americans trying to stave off medical bankruptcy via a GoFundMe campaign. Faced with a real, looming crisis, I can’t say these efforts shouldn’t happen; they’re imperative, though they often fail, and leave the systemic contextual problems intact. Superflex’s Hospital Equipment may succeed again; it has certainly achieved a high level of awareness, or publicity. Is that the extent of its conceptual reach, though? Does the readymade transubstantiation really only need to occur in the mediated image of the project? Or even only in our minds? Maybe its greater impact should be exposing the tenuity of the art world’s own self-reinforcing system, whose currency, increasingly, can only be exchanged for the occasional self-congratulatory gestures of a handful of aesthetically inclined multi-millionaires seeking the approbation of an even smaller coterie of hedging billionaires.
SUPERFLEX Hospital Equipment, Feb 16 – Mar 18, von Bartha, S-CHANF, Basel [vonbartha via artnet]
Hospital Equipment, 2014 [superflex.net]
Carl Nielsen og Anne Marie Carl-Nielsens Legat 2014 [denfrie.dk]