In The New Republic, Jed Perl wrote an impressive review of an even more impressive exhibition, “Tapestry in the Renaissance” at the Metropolitan Museum, which I saw last weekend. After a detailed, compelling, history-filled analysis, Perl surprisingly (and effectively) contrasts this “alternative medium” (ie., tapestry) to the current crop of “alternative media” that are generally displacing painting in current art (or curatorial) practice.. For me, though, something else stuck after seeing these unknown–or at least, wildly under-appreciated–masterpieces.

The unparalleled centers of tapestry production were the workshops of artisans like Pieter van Aelst, and Willem and Jan van Dermoyen in Belgium, Flanders, and the Netherlands, where the expertise and artistry built up over centuries culminated in these Renaissance-era works. The exhibit’s coda talked about the decline of this art after 1560, a result of civil wars, disrupted Continental economies, and the dispersion of the workshops’ artisans. As a result, the accumulated, communal expertise was lost; there’s no way any of these tapestries could be recreated today, or any time after the 16th century, for that matter. After being swept away by the beauty and skill of tapestries I never knew, I was suddenly saddened by the show’s unintended (?) elegiac nature.

What is the comparable loss we may face now? Is it Andreas Gursky’s style of computer-manipulated mega-photography, which captures the scale and power of global capitalism? (I wrote about feeling defiant yet guilty for wanting art after September 11th, hurt by what I saw as Andreas Gursky’s failure to follow through on a logical extension of his work by documenting the WTC aftermath.) Is it Matthew Barney’s hermetic film cycle, enviably overproduced from many artists’ standpoints (What would you do with $4 million for your film?), which relies on a global web of collectors and museums to purchase the images and objects that support it? Is it Star Wars, which, in its latest incarnation, is easily as detailed, ornamental, and propagandistic as any tapestry, while being just as dependent on a global commercial and media infrastructure?
Or is it something completely different? For almost a century, artistic production has been separated (liberated? divorced? hijacked?) by Duchamp and Benjamin from the primacy of the unique object, something “created” (like a tapestry or a painting). Instead, it’s the idea, the vision of the artist that rules, not its execution. Art can now be found, or designated as such, or created from everyday objects, like Gabriel Orozco‘s picture of breath on a piano, or a sculpture of plastic bags and yucca leaves. Or like Tony Feher‘s coins on the floor or bottles on a shelf. Or like every Felix Gonzalez-Torres work I can think of. It can not exist at all, except as a set of instructions, to be executed with the artist’s approval, like a Sol Lewitt wall drawing or like Elmgreen & Dragset‘s shadow projection on a wall. It can be the simplest recreation of an everyday occurence, like Olafur Eliasson‘s giant sun. These works–and the continuing creation and appreciation of them–rely on shared values and ideas, dialogue, interaction, all built up over time. They’re ephemeral-but-very-real embodiments of civilization itself, of civil behavior over time. Which type of art is most threatened by the disruptions our civilzation is facing? 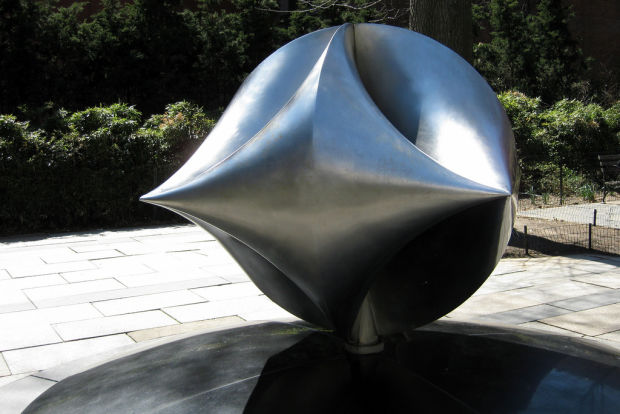 Santiago Calatrava Times Capsule, 2000. Photo c. 2009 by Wally Gobetz via flickr/cc
This contrast has been noted before, for instance, when the NY Times decided to create a “Times Capsule” expected to last a thousand years. Jack Hitt laid out all the issues and challenges of creating something to last 1,000 years: what media to use, should it be hidden or displayed, what should it contain? Their choice, based on the idea that “beauty is its own defense,” was to commission the architect Santiago Calatrava to design a beautiful, indestructible-as-could-be object, which was entrusted–for the first couple of centuries, at least–to the American Museum of Natural History. In the last paragraph, Hitt writes something that made me gasp to reread after so long:

Yet we know that not even the best technology, unattended, stands a chance against the slow grind of nature. Ultimately, we are throwing in our lot with culture. We’re counting on the random, vagrant interests of people who might ignore the capsule for a while but who in time will grow curious about it and take care of it. We depend on them and await them, arriving over the centuries in their cameo brooches and porkpie hats.

I don’t know what kind of art will become the Renaissance tapestry of the early 21st century; I, too, have thrown my lot in with culture; I’ve got work by all the artists mentioned in the latter group above, and none from the former (except for a knot of action figures from the first Star Wars in 1977). But if the Times had planned its time capsule in 2002 instead of 2000, would they have made the same choice?