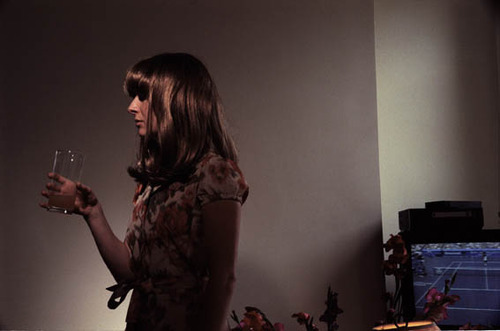 Jonah Freeman, Making the Nature Scene, 2000, c-print, images: edw mitt
For a while, Ive been meaning to post some information and images of Jonah Freeman’s work. He was the DP and editor for my short film, Souvenir November 2001, but his main gig is visual art: he makes photography, video, and sculpture/installation art. He exhibits all over the place, and he shows regularly at the Andrew Kreps Gallery in NYC. This past spring, while he was editing 24/7, he was also working 24h on designing and building a stunning installation for the Public Art Fund in NYC, his largest project to date. Here are more images of his work.
The NY Times says of his work: “Occasionally voyeurism takes spectacular form…as in [his] funny, alarming surveillance video of a Manhattan hotel.” Right before he did Souvenir, he shot a beautiful film for the New York designer Tess Giberson. His interest in the subtleties of light (including explorations of its spatial characteristics and translucency) his spare, distant/intimate narrative style, and his up-to-date handling of classicist forms and symmetry made him my first and earliest choice to shoot the film. Plus, he knew how to work the lights and the camera.
Much of whatever beauty and visual power Souvenir has is because of Jonah. Reading back over the location diary, he caught some truly sublime shots; some tight, emotional/energetic shots; and some really crucial shots we would have been screwed if we’d missed. Don’t think this weblog stroke job is to pay him off; I couldn’t pay him enough (andI’m sure he’ll agree). I’ve been working on the electronic press kit lately, and I’m in an effusive mood.