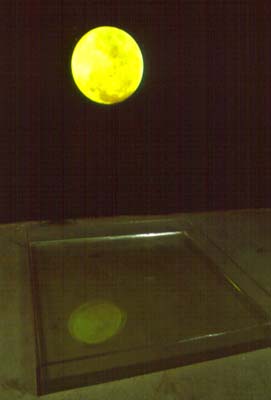 Michael Elmgreen & Ingar Dragset, Powerless Structures, No. 59 [image via]
A friend‘s web writing has plummeted in frequency while rising in substance. This paragraph triggered a cascade of images:

and so yesterday you asked yourself, naturally, under an impossibly full moon, in the middle of another state, in the middle of the woods, blue-gray light spilt over the water’s gently trembling surface, the hypnotic criss-cross of ripples, the disappeared stars, the misty gray-blue air that spoke of you never being alone, even when alone: “but what is the double-grief?”.

Elmgreen & Dragset’s piece (above) was in a 1999 show at The Project. (They show at Tanya Bonakdar now.) It was in the basement, a low-tech sublime landscape. An effable reflection, made permanent (as long as you accept its completely manmade nature).
Last week, as I climbed into bed in NYC, an unusual light shone from across the street. It’s not the retro streetlamp, but far higher. You can’t see the sky from our north-facing parlor floor apartment, either. It’s the moon, nearly full, at just the right angle to reflect in the fifth floor window of my neighbor’s townhouse. Sit up, lie down. Sure enough, it’s only visible from this one spot. In a few minutes it disappears. Could I have captured it on film? with the digital camera? No, the flash’d go off and I’d have a stupid snap of my wall. How do I know?
A morning in a Hawaii, where the door to our hotel room faced due east. Stepping from the shower, an exclamation. A circular rainbow, not six inches across, projected on the far wall. We studied and stared for several minutes, watching the sun shine straight through the peephole. Hurriedly, we dug out the digital camera and snapped away. Flash, flash. Nothing, but over-illuminated bamboo-esque furniture. We had to content ourselves with the knowledge that Olafur Eliasson could probably recreate the phenomenon, if asked. He made this, after all…
Some things, it seems, cannot be captured, only approximated. Recreated. Reflected.