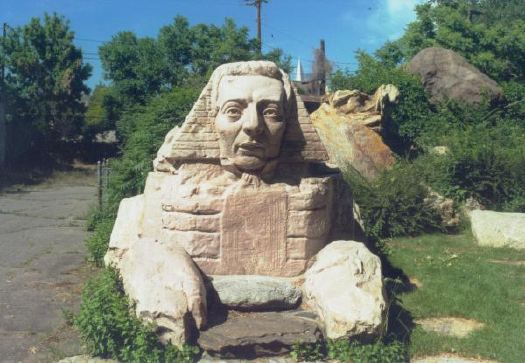 Joseph Smith Sphinx, Gilgal Garden, Salt Lake City [image via pjf]
Unable to stay asleep, I read Paul Ford’s excerpt of Benjamin Franklin’s autobiography, wherein I learn that Franklin’s worth more than a Benjamin. At age 79, he recounts his clearheaded pursuit of Moral Perfection, determining that:

on the whole, tho’ I never arrived at the perfection I had been so ambitious of obtaining, but fell far short of it, yet I was, by the endeavor, a better and a happier man than I otherwise should have been if I had not attempted it; as those who aim at perfect writing by imitating the engraved copies, though they never reach the wished-for excellence of those copies, their hand is mended by the endeavor, and is tolerable while it continues fair and legible.

Since it’s much more fun to get (morally) high together, I invite you all to listen in to the semi-annual General Conference of The Church of Jesus Christ of Latter-Day Saints which takes place this weekend. A well-spoken crop of 79-year olds (give or take a few years) will be imparting the Word from The Pulpit.
This in turn brought to mind the shiny corporate newness of the giant conference center that recently usurped the more famous Tabernacle as the official seat of the Conference. And for a moment, I was sad to see only one Google citation of my preferred name for the center, the Meganacle.
And which kindred wordsmith, laboring alone until now to propagate this term, accurately points out the building’s resemblance to ancient Babylon or “government buildings constructed during Franco’s era in Madrid?” Terry Tempest Williams, who’s more Word Whisperer than wordsmith, I guess.
Lacking a serene slate terrace and a morning dew-covered chair from which to watch the fawns scamper, I’ve never read TTW’s books. (Although they sure love her over on the NPR.) But this essay–which includes an interesting story of visiting her ancestors’ graves and “sharing genealogies, a typical Utah pastime,” with fellow cemeterygoers–also gives a great deal of attention to Gilgal Garden, a brilliant and unusual work of Mormon artistic expression I’d always thought we weren’t supposed to talk about. See more photos and the original brochure.