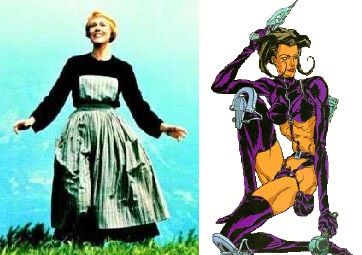 My attention has been turned to the as-yet-unannounced feature I’m writing (unannounced because of the desire to confirm clear ownership of the story, because it’s freakin’ brilliant, and because there were some major plot questions in turning it into a kick-ass movie), an animated musical. On the train down to DC the other night, I had a breakthrough, facilitated by my decision to rewrite the script from scratch instead of waiting for the data-recovered version to arrive (or not) from my dead hard drive.
This take-it-from-the-top approach opened the floodgates, let all the pieces fall into place, whatever the metaphor is, it’s working. I laid out all of Act I, have about half the dialogue for Act I, and am now deep into Act II, which is unfolding in my brain with unexpected clarity. Within a couple of days, I should have a completed draft/outline, with some scenes, dialogue, and detail worked in. The questions, problems, or plot points that are still unresolved (or that arise from here on) should be pretty manageable. In a nutshell, it feels great.
Just to show how deluded and misplaced my confidence is, here is a footnote I put at the end of the first paragraph. “Opening scene refs: Aeon Flux; Matrix, Star Wars, War Games, Snow White, Minority Report, Austin Powers, Terminator, a pile of RPG and FPS games.” The Star Trek IV, Sound of Music, and West Side Story references don’t show up until later.