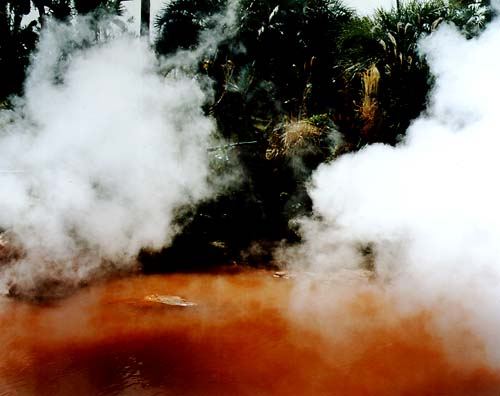 I can’t believe it’s been five years since I saw photographer Liz Deschenes’ first solo exhibition, Beppu, at Bronwyn Keenan Gallery. It’s a show that has stuck with me ever since, and not just because I go to sleep and wake up looking at photos from it (the first one I got is visible in this installation shot. It’s in the middle of the far wall, to the left of the monochromes.)

Listening to Deschenes talk about photography and her work was a stimulating challenge; my eye&brain had to work hard to keep up. Needless to say, I vouch for the artnet.com reviewer: “I cannot help but think that Liz Deschenes has carefully considered the entire history of color photography.” Looking at her deceptively simple, beautiful landscape photographs, her deep understanding of photography is quickly apparent; they’re spatially complex, with no easy fore-, middle-, or background.

In fact, they turn out to have a great deal to do with painting, especially the modernist’s concern with the painting’s surface, and the minimalist’s interest with color, form or object. A later, nearly all-white photo of the salt-crusted sands of Death Valley could be a Ryman, at least until you figure out that’s a rock there near the top. And of course, the print itself is so sleek and intentional there’s no mistaking it for paint or canvas. The materiality of the photographic, printing, mounting process also matters, it turns out.

Over the years, as my looking and collecting increased–and now that I’ve gotten into the imagemaking business myself, albeit in a far less accomplished way–Deschenes’ work continues to be a touchstone for me. It’s a demanding favorite of connoisseurs which I somehow stumbled upon early, and which I’ve been trying to live up to ever since.