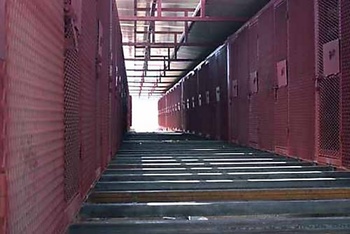 Last month I wrote about art and architecture made from connex containers, the standard 40-foot steel boxes used for international shipping. #1 architects MVRDV proposed a complex made from them for Rotterdam, their home town (and a major port). As the discussion on this architecture message board shows, container architecture is an idea with a lot of adherents.
Now you can add the Department of Military Aesthetics to the list. Containers were used to construct Camp Delta, the more permanent neighbor of Camp X-Ray, on the military base under US control (if not jurisdiction) in Guantanamo, Cuba. Here’s a description from Joseph Lelyveld’s very long NY Review of Books article about the quandary of the Guantanamo detainees:

Delta was thrown together for $9.7 million by a private contractor, Brown and Root Services�a division of Vice President Cheney’s old company, Halliburton�which flew in low-wage contract labor from the Philippines and India to get the job done, in much the same way that Asians were once brought to the Caribbean to harvest sugar cane. The cell blocks are assembled from the standard forty-foot steel boxes called connex containers that are used in international shipping: five cells to a container, eight containers to a cell block, with four lined up on each side of a central corridor where the lights and fans are installed. Welders cut away three sides of each container, replacing them with sidings of steel mesh, leaving the roof, floor, and one steel wall into which a window was cut. Floor-level toilets were installed�the kind requiring squatting, traditionally described as � la turque�and now these are sometimes mentioned as an example of American sensitivity to the cultural needs of the detainees.