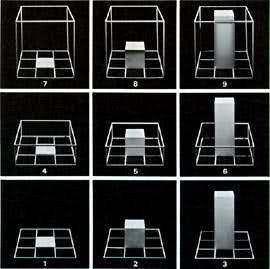 Serial Project #1, 1966, Sol Lewitt, from Aspen 5+6
Unbelieveable. The entire collection of Aspen: The Magazine in a Box, is now online. It’s the magazine equivalent of Kieslowski’s Dekalog: almost completely unknown, yet highly respected and influential within its narrow audience.
In a fit of John Cage admiration, I tracked down and bought Aspen 5+6 several years ago. In addition to some floppy little records with Cage and Morton Feldman on it, there’s a reel of 8mm film with works by Laszlo Moholy-Nagy, Robert Rauschenberg, and others; documents of Sol Lewitt’s seminal 1966 1967 exhibit at the Dwan Gallery in LA, Serial Project #1, and a little Tony Smith sculpture you can make yourself.
Not owning a record player or an 8mm projector, my edition of Aspen has been more a glassined, bubblewrapped holy relic than anything else. Until now. The Moholy-Nagy film is full of glare, shadows and light reflecting off of machinery, as if Jeremy Blake and Paul Thomas Anderson were the same person. Check it out. Thanks, UBU (and thanks, Fimoculous for the link.)