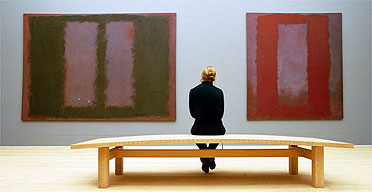 In The Guardian, Jonathan Jones takes a while to get to an interesting story of Mark Rothko’s masterful series of paintings, originally commissioned for the Four Seasons restaurant. It seems Rothko painted them in contempt and withdrew them in disgust after checking out the Cafeteria of Power and deciding the moguls would be insufficiently cowed by the art. Two of Rothko’s overt influences: the “bricked up windows” of Michelangelo’s Laurentian Library vestibule, and Pompeii’s Villa of the Mysteries (“strange,” “luxurious and hellish,” a Dionysian attack on Mies/Johnson’s rational order ) [12/12 update: The Times reports Vivendi Universal is preparing to sell the Seagram collection, which would have included the Rothkos in the Four Seasons.]
On another note, Laura Winters, long the NYT‘s and Washington Post‘s go-to journalist for a new generation of independent and foreign filmmakers (and Harvard alum), gives Vogue‘s celebrity coverage an upgrade with a profile of plays-a-writer-in-Adaptation Meryl Streep. Problematically, Ms Streep and the two actresses I’d pick to play Laura in the movie–Ms. Danes and Ms Foster–all went to Yale.