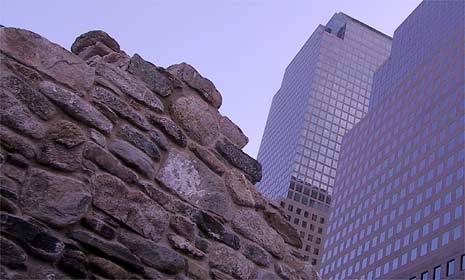 On his photo weblog lightningfield, David Gallagher published some photos and reviews of the Irish Hunger Monument which opened this summer in Battery Park City. The Monument is designed by artist Brian Tolle, whose idea was to create a 1/4 acre plot of Irish farmland in Manhattan. This patently artificial landscape recalls the British land policies which exacerbated the Irish potato famine of the 1840’s. Critical response to the monument has been mixed, but I have to appreciate the work’s solid conceptual basis. There’s a cautionary tale here, though, about how to deal with constituent and political exigencies; according to one reporter’s account, Tolle argued against several elements which have come under criticism. (When a monument brags about having “nearly two miles of text,” feel free to worry.)