Herbert Muschamp, the Professor Emile Flostre of architectural empathicalism, gives his blessing to the THINK team’s proposal to build a World Cultural Center at the former WTC site. 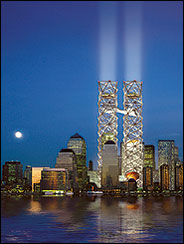 There are several things to like about the proposal, not the least of which is to turn the emphasis from the overwhelming commercial interests on the site, which the market can take care of just fine, thanks. Think’s proposal most closely ressembles Paul Goldberger’s call for an “Eiffel Tower for the 21st century,” which would place greater importance on technological and symbolic marvel than on purely functional architecture (go ahead, tell me how many rentable square feet is the Eiffel Tower?). And I thought the WTC-WCC connection struck a powerful chord.
Enough with the turn-ons, now the hang-ups: the awkward relation to the oh-so-holy footprints; the lattices’ form, too-close-to-the-originals evocation of the towers which, I think, will age poorly; skepticism of such a project’s survival in the pathetic, poisonous political environment of the rebuilding process.
For my part, such open towers would make my own idea for a memorial possible: large, quiet halls in space (x,y,z space) near the points of impact on the original towers.