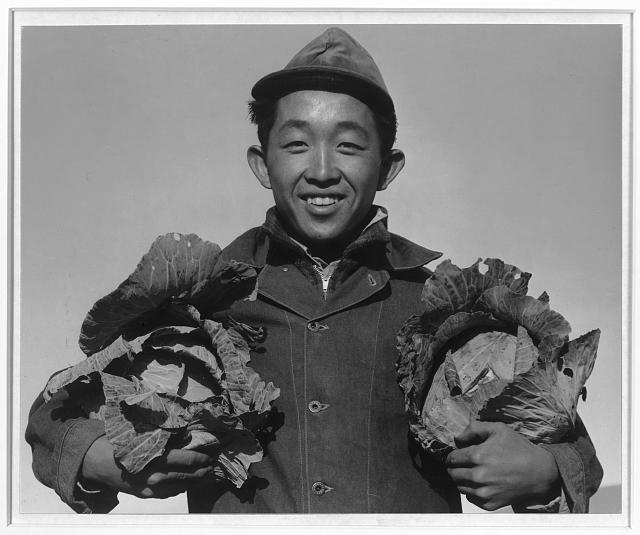 Richard Kobayashi, farmer and cabbages, Manzanar Internment Camp
photo by Ansel Adams image: loc.gov
In 1990, just out of school, I was transfixed by a copy of Ansel Adam’s self-published book, Born Free And Equal, at a big antiques show. At $200, it was the most expensive book I’d ever wanted, and I choked. Almost five years of searching later, it was the first thing I bought online, from a collector on a photography newsgroup. [Of course, now you can almost always find a copy on Abebooks.] Adams’ combined his photographs–signature landscapes, portraits and documentary shots–of the Japanese American internment camp in Manzanar, CA with his scathing text to condemn the US government’s (all three branches) stripping of US citizens’ and residents’ civil rights.
Published in 1944, Adams’ book was poorly received, no surprise. Many copies were reportedly burned, and today, it is an exceedingly rare, little known work by a very famous photographer. Since the 1960’s, the Manzanar collection has been at the Library of Congress. Tell Jack Valenti when you want to see his neck twitch: Adams put these pictures into the public domain, to assure their survival. View all 244 images here. 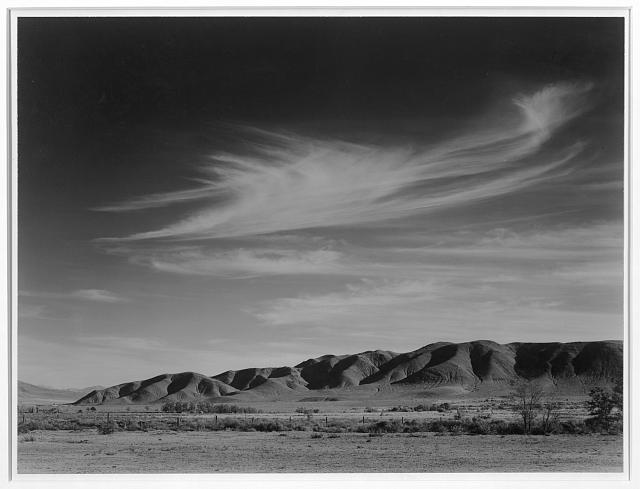 Manzanar landscape with barbed wire fence
photo by Ansel Adams, image: loc.gov
Why do I post this now? Well, I have contemplated ideas for a film based in the camps. And a John Ashcroft deputy has suggested such camps for Arab Americans would not be illegal. But now, a Congressman from North Carolina (home state, thanks), the Chairman of the House Subcommittee on Domestic Security, has defended the camps, proclaiming them “appropriate” and “for their [the Japanese’] own safety.” Two branches down, one to go.