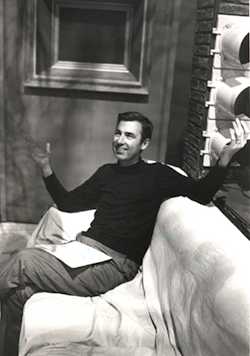 I was too young to get worked up about moving from New York to Indianapolis, but I remember being very nervous about moving from Indianapolis to Raleigh. One day, my 1st-grade teacher took me to Dairy Queen after school to talk about it.
“Well, I don’t know anyone,” I complained, “and there aren’t any famous people from North Carolina.” (New York already had its hooks into me, it turns out.)
“Like who?” Mrs Hershenson asked.
“Like Cowboy Bob.”
Although, at the time I didn’t realize the golden era of locally produced kids’ shows was ending, I had a point.
Deftly skirting a potentially ugly Cowboy Bob-Andy Griffith shootout, Mrs Hershenson asked, “Is that important to you?”
Proto-New Yorker answer: “um, yeah.”
“Well, what about Mister Rogers?”
“But he’s not from Indianapolis.”
“No, you’re right. He’s from Pittsburgh. But his show is on a network, which means it’ll be on in North Carolina, just like it is here. So when you get to Raleigh, you’ll already know someone. And then you’ll make a lot of other friends, too, in no time.”
Thus, in addition to explaining the differences between affiliate and network programming, Mister Rogers (and Mrs Hershenson) helped me to see that my neighborhood extended far beyond my street, and they guided me into to a lifetime of seeking out the friendship of famous people.
Mister Rogers passed away today, after a recent diagnosis of cancer. View a timeline of Fred Rogers’ achievements, including a behind the scenes clip from the first show, and his 1969 Senate testimony where he passionately argued for the creation of PBS, at pbskids.org.