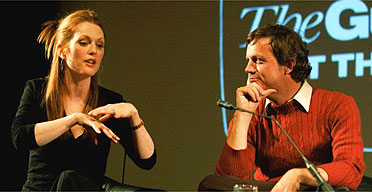 A very good, long Guardian interview by with Julianne Moore and Todd Haynes at the National Film Theatre in London.

And I have to say, I look back on Lindsay Law, who was from American Playhouse and was our producer on Safe, and David Aukin, who worked at Channel 4; those guys are so rare, I realise in hindsight how much courage financing producers had to have to stand back and trust you. Now I would look at these dailies from Safe, where Julie was a speck on the screen and the whole film would be played out in a single shot. And he was like, “I don’t get it. I don’t get it.” But he would never talk to me and never say, “Oh, more coverage” or put in his two cents just to make himself feel more creatively esteemed. That’s so unusual, that kind of courage and I just now realise the extent to which that helped me. So we were really lucky and although we had just under a million dollars to make Safe, which isn’t amazing to think of, but it felt like it. It was tough. But I still had the freedom to do what I needed to do.