Generally avoiding television “coverage” of the war, but some images inevitably bleed in. Here is some art that’s been on my mind as a result. [Also, gmtPlus9 went black in Japan and posted some war-related art. Thanks, Travelers Diagram.]

Blast, from a series of photographs
by Naoya Hatakeyama, image: LA Galerie 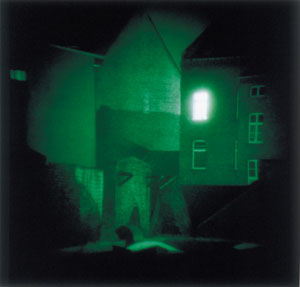 Nacht 1, II by Thomas Ruff, who began using nightvision after
the technology was popularized in Gulf War I (GWI), image: ZKM.de

Olivier Silva, Foreign Legion 2000-2002, ongoing, by Rineke Dijkstra,
who is photographing one man through his term of
service in the French Foreign Legion. images: Galerie Jan Mot

Hmm. JP, DE, FR, NL. I just noticed these are all from countries who know war firsthand, on their own soil.