I’m busy with some offline writing (just wait and see), but in the mean time, I felt the gaijin‘s obligation to provide some context for the recent one-eyebrow-raising >> reach-for-the-doorlocks reports of that road-trippin’ Japanese cult, Pana Wave Laboratory. Their site is only in Japanese

First the bad news: despite the promising name, the cult makes its money from herbal supplements and water purifiers. So no trip-hop CD is in the works.
Now that that’s out of the way, the world will end tomorrow. “[Armageddon] will be caused when electromagnetic waves strike the Japanese archipelago and the delicate gravitational balance between the Andromeda nebula and other nebulas is altered,” warns Chino, Pana Wave’s leader. (from a great Mainichi Daily News article, with pictures. SMH has another caravan pic. Cult critic Rick Ross has a Panawave news page. This message board is for people waiting for Zeta Planet X to arrive and reverse the earth’s poles. It’s due tomorrow, too. Busy day.)
Did I say tomorrow? Japan’s 12 hours ahead of the east coast right now, so it may end by lunch. Chino didn’t say what timezone she’s calculating from.

Pana Wavers wear all white and drape white cloth all around them, deflecting scalar waves with mirrors. Chino et al are seeking a place, any place, where they can escape what they see as an ecologically disastrous paved, wired grid. Right now, they’re draped out in Hachiman, a tiny rural town in Gifu, an area of central Japan where I happened to live (another story). Here is an official Powers of Ten-style map of Gifu, which, coincidentally, places Hachiman at the center of the world.
[The mountainous regions of Gifu have some of the last, best examples of classical Japanese farmhouses, known as minka. The greatest architecture photo book I know is Nihon no Minka, by GA’s Yukio Futagawa. Around 440 pages of gorgeous 1950’s B&W photos of traditional Japanese architecture, 99% of it gone by now. Remarkable images of unpaved roads, thatched roofs, and nearly power-line-free vistas. Published in 1962, and reworked in 1980 into Traditional Japanese Houses. I bought the only original I ever saw, at Roth Horowitz. When it was still on Thompson, Perimeter had the reissue. If anyone has the original, it’d be Book Cellar Amus in Osaka. That guy has everything. If the world doesn’t end, I’ll scan some images.] 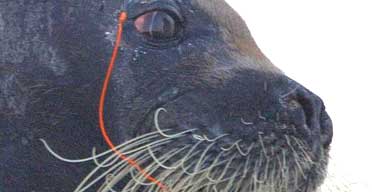 Of course, no apocalyptic cult story would be complete without a media-darling seal. Tama-chan wandered into a polluted Tokyo river last August, and became a cuddly symbol of Japan’s need to face its environmental problems. Pana Wave revealed they were behind controversial failed attempts to capture Tama-chan, who, Chino warns, is the only one who can save us now. [hmm Leia wore white, too. Coincidence?]

In the mean time, the art world’s own Tesla Girl, the heiress Mariko Mori, just opened Wave UFO at 56th & Madison. She’s collecting brainwaves and projecting a mind control video inside this pod. From the brochure: “Wave UFO seamlessly unites actual individual physical experiences with Mori’s singular vision of a cosmic dream world.” It was first exhibited at the Kunsthaus…in Bregenz.
On a different (?) note: For an absolutely riveting collection of interviews with both survivors and attackers of the 1995 Aum Shinrikyo subway gassing, read Haruki Murakami’s Underground. One reviewer says, “Unlike a journalist, Murakami doesn’t force these searing narratives into tidy equations of cause and effect, good and evil, but rather allows contradictions and ambiguity to stand, thus presenting unadorned the shocking truth of the diabolical and brutal manner in which ordinary lives were derailed or destroyed.”