It’s an inadvertent but recurring subject of interest here at greg.org: the architectural use of connex shipping containers. Sunday, NPR aired a puffy little interview with Zalmay Khalilzad, the new US envoy to Afghanistan; it turns out he’ll be living in a shipping container on the heavily fortified grounds of the embassy in Kabul. He’s not alone. According to this AP story on AfghanNews.net, over 100 containers were refurbished in Dubai to provide instant housing for the influx of US personnel. This picture comes from an account of someone posted to Kabul. Americans may have added microwaves, TV’s, private baths, A/C, “some tentative-looking shrubs and bushes” out front, and in one case, a pink flamingo to their containers, but except for their fresh coats of paint, they’d blend right in to the Kabul skyline. Except, of course, that US containers are reinforced with sandbags and ringed with concertina wire.

Don’t let a construction industry devastated by 30 years of chaos
get you down! Rebuild your marketplace with containers!
image: Barnaby Hall’s travelogue in Duke’s alumni magazine.
Turns out you can fit a lot of irony into a 40-foot shipping container. And just when you think it’s full, well, you can stuff in some more. Another Afghani-related compound, Guantanamo’s Camp Delta, is built from shipping containers. But so, it turns out, is the Army/CIA’s interrogation center at Bagram Air Base, the site of reported torture and human rights violations in the name of our war on terror. (As the WP quotes one official, “If you don’t violate someone’s human rights some of the time, you probably aren’t doing your job.”) They’re also the structure of choice for expanding Israeli outposts in the West Bank. Containers, concertina wire, and conflict apparently go hand in hand.
With their adaptability, rapid portability, and instant utility, containers are the architectural embodiment of “Flexible Response,” Donald Rumsfeld’s doctrine of military transformation. Of course, “Flexible Response” isn’t new; it grew from the Korean War, and Rumsfeld’s predecessor Robert McNamara implemented his own quant-heavy interpretation in Vietnam. The 21st-century version is just air-conditioned for our comfort.
Here’s the AP’s glowing, realtor-like description of Khalilzad’s new pad: “Three containers were used to create his relatively palatial hootch, with a formal dining room that can seat eight, a front sitting room and a side lawn. A wooden fence around the ambassadorial residence gives it privacy and a suburban hominess.” 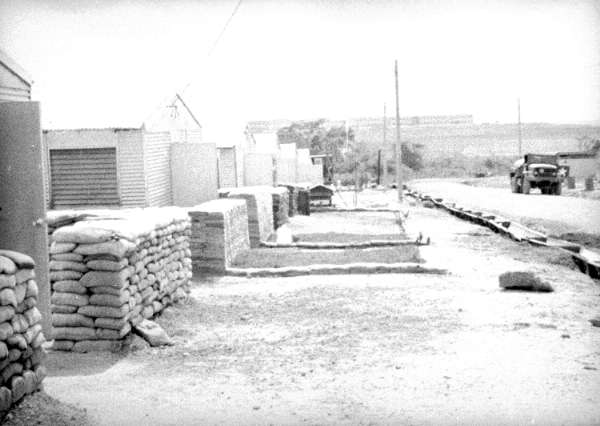 A hootch? If you have to ask–and I had to– a hootch is soldiers’ slang for instant housing, particularly the aluminum sheds they inhabited in Vietnam.
Related: the Darren Almond shipping container post that started it all, plus some unexpectedly moving memorial realizations.