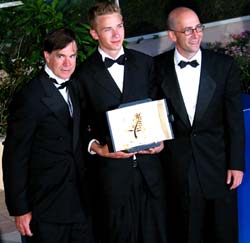 Gus Van Sant, Elias McConnell, and Dany Wolf
at Cannes 2003, image: festival-cannes.com
There he is, scorched in Death Valley and on the Saltflats of Utah; in a mold-closed school with a barebones crew on scooters; and on the Palais steps of Cannes, where he accepted the Palme D’Or this year for Elephant.
Gus Van Sant? Sure, he’s there, too, but I’m talking about Dany Wolf, the producer. The guy who actually has to figure out how to make the movies Gus sees in his head.
While I’ve been a fan of Van Sant’s since Drugstore Cowboy, I’ve been very interested in his recent bold filmmaking experiments, which coincide with my own entry into the field. I wanted to find out Wolf’s on-set experience and insight on making the films that are remaking film.
Below, read my November 2003 discussion with Wolf, an exclusive feature of greg.org.
[Note: No underage Filipino data entry workers were harmed in the transcription of this 3,000-word piece. Special thanks to Dany Wolf, Jay Hernandez and Jeff Hill, who aren’t doing so bad, either.] 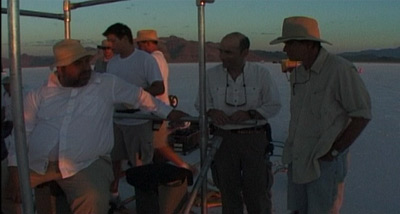