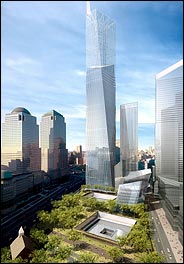 After a German press agency forgot to attach an embargo notice to them, the NY Times published images of the heavily revised Arad/Walker design for the World Trade Center Memorial a day early. There are quite a few changes.
Perhaps the most significant is the addition of a large (60-100,00SF, 1.5-2.5x the tower footprints themselves) underground space to house artifacts from the attacks.
But that’s not all: Access to the 30′ high space is via a ramp along the exposed slurry wall. From within the space, visitors can look down 40′ to the foundations of the towers. That puts the newly treed park at street-level. Most of Libeskind’s original cultural buildings have either been eliminated or relocated. And it’s not finished yet; jurors describe this design as but “one more stage of memory.”
It’s worth waiting to examine the design in detail, but it feels like it’s trying to accommodate almost every criticism that arose during the guideline and selection process. Which may be why the jury picked Arad’s design in the first place: only the most pared down concept could support all the additions they foresaw. Nice idea, but can it work?