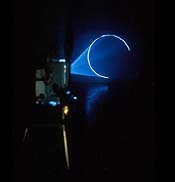 [via Fimoculous] Michel Gondry’s new video for Steriogram is all stop-action knitting. There’s a little too much Peter Gabriel going on, but the shots where the band’s watching a knitted movie are brilliant.
It reminded me of a piece at the Whitney’s “Into the Light” exhibit of American video art, Anthony McCall’s 1973 Line Describing A Cone, where a projected image of a circle created a cone of light in the smoke-filled gallery.
I just watched all Gondry’s videos, and I must say, they made me a little tired. The White Stripes Lego video is probably my favorite. The transposition of filmspace onto flat lego boards is pretty ingenious. There’s some of that, with knitting in perspective, etc., in the Steriogram video, too.
[update: it didn’t occur to me to add a link to buy the Steriogram CD until an hour later.]