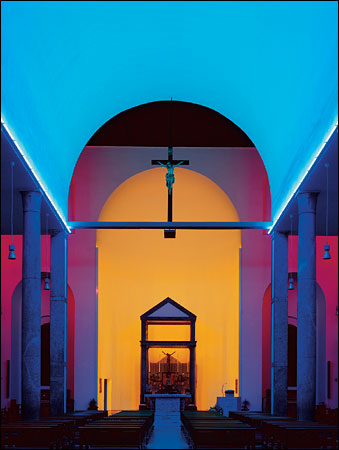 WTF? Herbert Muschamp in today’s NYT Magazine: “[Miuccia Prada] has made the world safe for people with overdeveloped inner lives. [I guess, by selling bagsful of $480 polo shirts to armies of style-free mooks and molls from Manhasset.
[And by commissioning some hapless fop to recreate–and gut of all meaning beyond hip association through sheer and empty aestheticization–an actually controversial and culture-changing documentary by Pier Paolo Pasolini, which had already just been remade a couple of years before by some Italian TV producer.]”

When the gay, alarmingly unorthodox Pasolini made Comizi D’Amore in 1965, he exposed Italian folks’ unacknowledged yearnings for sexual, political, and religious liberation. [Rent or Buy Pasolini’s Comizi D’Amore on DVD.]
When Bruno Bigoni remade it as Comizi d’amore 2000, he found exhausted young trend-chasing Italians wishing to be “quietly ‘normal.'” [Both versions screened in 2002 at a conference in Rome.]
When Prada commissioned the video/embroidery artist Francesco Vezzoli to reremake the movie, he interviewed a bunch of louche old actresses on a Dating Game-style set, stripping the responses of any weight or significance beyond the consumerist glamour and spectacle that feeds Prada’s corporate brandweb. If Vezzoli has any independent creative aspirations, I hope he has Alek Keshishian on speeddial; his work is subsumed, a la Muschamp, by Miuccia’s hegemonic vision.
Of course we culture consumers don’t need Prada to access recognized artists like Anish Kapoor or Dan Flavin, Herbert. Prada’s the needy one, the one who’s business–selling near-generic products of indifferent quality with extremely high margins–needs the borrowed light of these artists to survive. [And I believe a clarification is in order: Dan Flavin’s last completed work was not his Prada Foundation chapel, but the Christmas windows of the then-new Calvin Klein store on Madison. Half dozen of one…]
Muschamp calls Vezzoli “Pasolini for the age of Berlusconi” and confesses, in his charmingly petulant way, “[he] will not be satisfied until Prada has personally designed an airport…From baggage to baggage claim, Prada, Prada, Prada. With some shopping, art and philosophy along the way.”
Hmm. Maybe Muschamp’s onto something there: A conservative oligarch who puts himself above the law while holding a monopoly on the entire country’s media. The sites with the most obvious daily manifestation of the surveillance/security infrastructure and globalized threat profiling. And a one-woman, one-stop shop for shopping, art, philosophy, and architecture, for culture itself. Maybe Muschamp is, um, righter than he lets on.
[now that I got that off my chest… Michael Kors, I’m coming after you.]