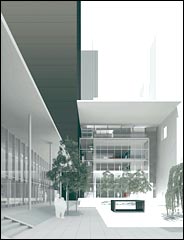 The Times‘ Sarah Boxer walks through Taniguchi & Associates’ soon-to-be-completed MoMA with Glenn Lowry. The early word is, it’s straight.
“…two huge windows, nearly floor to ceiling, face each other at opposite ends of the Sculpture Garden. Both are topped by anodized aluminum canopies. Both rise straight up from the ground level to the sixth floor. And in this case, Mr. Lowry noted, straight really does mean straight. ‘We designed it so that the facade has zero-degree deflection. There’s no bow.'” Walls, ceilings, joints, mullions, floors, all were designed by T&A to be crisp, rectilinear, minimalist, straight.
But not narrow, Lowry assures. With multiple doors, stairs, escalators and views, the straight new museum will offer a mind-expanding number of alternative experiences of the collection–and, by extension, through the history of art.
Evoking an unintentionally [?] Hitchcockian mental image, Lowry explained, “We don’t want people to feel they’re on a train.” Unless, of course, they’re into that sort of thing.