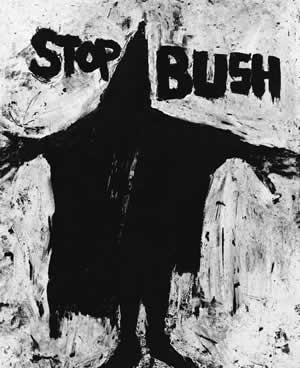 [via MAN] What’s shocking about Richard Serra’s poster for pleasevote.com–a thick paintstick silhouette of the hooded Abu Ghraib prisoner–isn’t his use of text or figurative representation, both completely absent from the rest of his work (with possibly one 1960’s exception).
And it’s not his political activity. He’s always been an active liberal, and his art challenges both easy commodification and conservative notions of authority. And who can forget his legal battle with the GSA and anti-NEA zealots like Jesse Helms which culminated in the destruction in 1989 of his sculpture Tilted Arc (besides pretty much everyone, that is)?
No, what shocked me was his positively statesman-like restraint, which stands in contrast to the horrible image in his drawing and to current levels of Administration discourse. With STOP BUSH, Serra–who’s well known for his angry temper–let’s George off easy.
In 1990, he made an etching as a fundraiser for North Carolina Senate candidate Harvey Gantt, who lost after his opponent ran some race-baiting ads that have become recognized dirty tricks classics. The title of that piece (sorry, mom) was Fuck Helms.