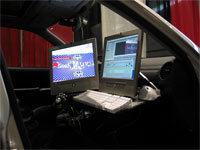 Got that? It also equals the most ridiculous incarnation of dependent filmmaking this year.
In the feat of boys-and-toys bravado that’ll surely earn them front row seats when the revolution comes, tech superpowers, pimped geeked out a Lexus IS300 with a full 30fps HD video editing system, including a 42-inch flatscreen you have to put in the backseat (oops, there goes the sound engineer and PA). [See specs and pics.]
At least the station’s on the passenger side, so you’re not tempted to cut the dailies while you obliviously cut off that school bus. full of handicapped orphans. that just drove into the lake. (Hey! Exclusive footage!)
Anyway, Wired reported on the rig at MacWorld, where the company sponsored “a competition to find the best short film about Macworld that was edited in the car.”
I would get American Standard to sponsor a competition for the best short film about a turd that was dreamed up on the toilet. Oh, wait. Michel Gondry already won that one.