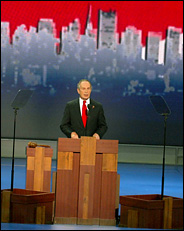 “President Bush’s chief political strategist, Karl Rove, told CNN he did not think the podium’s decorative woodwork looked like a cross.
“‘My God, where do they come up with this stuff?’ he said. ‘Does it look to you like it’s a cross? I don’t think so.'”
– Jewish Groups Irked by Cross on Republican Podium [Reuters, 9/1/04]

“Beside the podium is the gavel stand [which holds a gavel, the symbol of judgment, oh, and by the way, Jesus is the Judge. -g] constructed of wood panels, with lighter shades in the center in the shape of a cross — the Christian symbol of the crucifixion of Jesus.” [Reuters]
Not to be all nit-picky, but since Jesus Himself makes the distinction: if that gavel stand symbolizes Christ The Judge, then the speaker is on His Left Hand.
[via The Revealer]