While the discovery of an underground cinema in the center of Paris has been widely covered, little or no attention has been paid to what the films actually played there. Les Arenes de Chaillot (The Chaillot Arenas) was created by La Mexicaine de Perforation, a group of self-labeled urban explorers who, for the last five or so years, have used the invisible and forgotten infrastructure of Paris as their own curatorial venue, putting on exhibitions, concerts, and, beginning last year, film screenings.
Early Sunday morning I spoke with Lazar Kunstmann, a filmmaker, editor, and the public spokesman of LMDP about the group’s objectives, ideas, and inspirations. Turns out there were at least two weekly film series, including Urbex Movie, the one that someone narc’ed out this past summer. Here’s what they showed and why:

g.o: What is LMDP and why build a cinema in Chaillot? I think a lot of people were very excited to find out about this cinema; it’s kind of romantic, in a way.
LK: [LMDP] is a group of urban explorers whose members have more than 20 years experience. Transforming places is what they do every day, so making a cinema was an easy thing to do.
In Paris, urban explorer groups share common ideas between members, so people may belong to different groups at a given time. LMDP is a 5-year old group of people who like cinema, concerts, photography, and who use their urban exploration abilities to perform, exhibit, and create film festivals, etc.
There have been lots of underground festivals, maybe microfestivals, lasting only 4-5 days on a particular theme. Last summer was Sesion Comoda, which was more about the underground. This summer’s festival, Urbex Movie, was the only one discovered by the media.
[Les Arenes de] Chaillot was only 14 40m from the Cinematheque.
g.o: That’s what I thought, but I wasn’t sure; it wasn’t ever mentioned in the press.
LK: In fact, the Cinematheque–the temple of French cinema–is built on the foundations of le Palais de Chaillot; it’s even underground itself. Les Arenes was also built on the unused part of this foundation at the same level, separated by only 14 40 meters.
g.o: So this connection was intentional.
LK: Of course. They are both below ground, at the same altitude. But Les Arenes had better sound.
The Cinematheque had programmed classics during the summer, while LMDP wanted to show films urbains, films with a specific point of view of the city itself. LMDP would show two movies each week which approached the same urban theme in different or complementary ways. People would come after the Cinematheque. 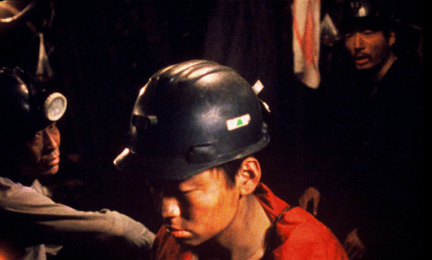 For example, LMDP showed the inversion of personality going into the underground can provoke. In the Korean film, Joint Security Area, two border guards–North and South–face each other with guns in the day, but meet as friends at night. Then in Blind Shaft, a Chinese film, it’s the opposite: people act like family above ground, but when they go into a mine, they kill each other. Both of these films aren’t even set in urban scenes, they’re in the country, but they show one of the underground points of view.
Every group of urban explorers by necessity is careful to be diverse with their members. They oblige themselves to be diverse because they need to be more creative than the authorities. It’s for survival, so we call it ‘biodiversity.’
We showed Ghost in the Shell and the b-film, Dark City together because they also deal with survival and biodiversity. Another common point is the dark settings where they take place. When they’re shown together, this darkness is heightened.
g.o: I read that you are a filmmaker yourself, and that your films were shown at Les Arenes. How would you describe them?
LK: I make short films. It’s a form which are not that appreciated in France.
g.o: Really? I always thought that Europe and France especially understood court metrage as its own medium; and there are lots of festivals to show in, etc.
LK: I don’t know about the rest of Europe but in official France, there are two kinds of short films: fiction, by students who have a budget, and the plot is always “they meet, they love, they quit.” They’re technically very good, but they’re boring and have no emotions at all.
And there are experimental films, which means “not showable.” Or “unfinished.”
Now, though, there are actually many good short films in Paris, whether on 16 or DV, that are being shown clandestinely. People organize nights to screen shorts, all on a theme.
For example there is a series called “House Movies,” which is screened in a squat. It’s clandestine, well, people know about it; it’s accessible, but kind of clandestine.
But even with squats you have some kinds of constraints. If you wanted to show this short with that classic feature of the same theme, for example, you might need permission, or if you don’t get some authorization, you know. We’ll see if it works or not, but you lose some of the instantaneity [a word neither of us could pronounce completely early in the morning, in either language. -g.o]
But underground, you have absolutely no constraints; you can show whatever you like without authorization.
In my job, I am a video editor, so I see a lot of documentaries that compose a fiction. I try to create a fiction that uses documentary in a new way.
One film I made last year, Electric, was talking about two ghosts in a power station. One, at the end of the day, was turning on the power, but he sees the city sleep during the day: no people on the street, no cars, etc. At night, the lights come on, and time starts. The other ghost is trying to turn off the power in the morning.
It was maybe five years ago when urban explorers learned how to connect all the different networks, to bring power, telephone, etc. underground as well. This was the first time ever that urban explorers’ activities were discovered by the police, and many people feared at first, “It’s all changed. Everybody knows.”
But at the same time, the society now sees that someone is doing this. You said ‘romantic’ before, but it’s more like a relief, you know? That this is happening somewhere.
g.o: That not everything is either official, or authorized, or corporate or whatever?
LK: Exactly. It’s biodiversity.
Read on: See the programmes for La Mexicaine’s 2003 series, Sesion Comoda, and the 2004 series, Urbex Movie, only at greg.org.