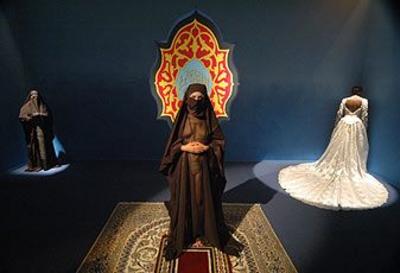 Dutch filmmaker and great grandson* Theo Van Gogh was murdered on an Amsterdam street today, ostensibly because of his short film, Submission. [That’s the title.] Since Submission was broadcast on the VPRO TV network in August, Van Gogh and the film’s writer, an “ex-Muslim” member of parliament, Ayaan Hirsi Ali, had received numerous death threats and accusations of blasphemy.
Seriously, what is up with these people? I can’t believe anyone not related to the filmmakers actually watches a short film, much less gets mad enough to kill over one.
[There was that one time when MVRDV got death threats over their short animated film, Pig City… And the guy who got them in that trouble, Pim Fortuyn, did get assassinated himself…]
Of course, if you make a movie with verses from the Koran painted on nude women’s bodies, which are visible through a translucent chador, I guess you might piss some of the wrong people off. So is it the offended militant Muslims who are crazy, or the Dutch?
Watch several minutes of Van Gogh and Ali’s film, Submission at VPRO.
A BBC profile of Van Gogh calls him “the Netherlands’ Michael Moore.” [talk about kickin’ a guy when he’s down…]
Reuters just reports, thank you very much.
* [update: When a guy’s named Van Gogh, you figure he’s related. When he’s named Theo, you should figure he’s related to the brother. He is. He’s Theo’s great-grandson, i.e., Vincent’s great grand-nephew. Vincent didn’t have any kids. That we know of.]