It took us a few months to realize it, but one summer evening, the street we were walking along grew increasingly familiar. We’d driven on this street, I told my wife, this is where we parked to go meet Anne Truitt. Sure enough, around the corner was the house she’d invited us to over a year and a half earlier, after I’d asked a curator and mutual friend had introduce us. 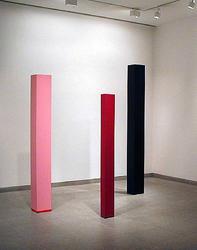 We had a wonderful time; she was very gracious, very engaged, talked at length about NASA and science with my wife; she’d just emptied her studio for a show, so there wasn’t much to see, but we’d see it when we came again, she promised.

Once we realized we’d moved into Anne Truitt’s neighborhood, we decided we should invite her over. The heat of the Washington summer made me doubt whether she would see a visit to our seemingly under-air-conditioned apartment as a fair return for her hospitality, so I waited until September to write her. We’d had a baby, &c., moved into the District, &c., realized you were nearby, &c.

Within a week, she wrote back, and I spent October planning the best occasion to have her over. We’d have her for tea [note to self: buy tea], or maybe even dinner [note to self: finally light stove]. We’d invite some younger artists, friends who had been inspired by her work and success in an art world that was still–in the minimalist 60’s and 70’s, especially–a hard-edged boy’s club. We’d invite some collector friends, who’d in turn thank us for introducing them to such an important artist. But mostly, we’d probably talk about our daughter–it’s all we ever do these days, anyway–who Mrs. Truitt had congratulated us on, and who she said she was eager to meet. And we’d trade stories about kids–and grandkids–and just enjoy her company.

Then in November, I saw one of her early, pioneering minimalist sculptures in the newly reinstalled MoMA. How’s that feel, I’d ask her. Have you seen the installation yet? No? Don’t worry, the pink Flavin in the far corner doesn’t reach your piece. Ryman’s, on the other hand… We’d share an insiders’ laugh, quietly acknowledging that the recent appreciation of Truitt’s work was the flipside of many years where her contributions and accomplishments were written off or unknown by many in the art world. History was written by the victors, they’d say, and she was Clement Greenberg’s girl… No doubt Truitt would bristle at the condescension behind the word, then she’d get back to work.

Last week I went to Baltimore for an upcoming screening, and I stopped at the Baltimore Museum of Art, which has some of the best holdings of Truitt’s work. Kind of a screwy museum, but it was nearly empty on a Wednesday morning, so I had the two Truitts and the neighboring (Ellsworth) Kellys and the McCracken to myself. I’d tell her about the visit, how her works seemed so evocative, minimalist in form, but imbued with some human aspect, made by a person, an idea that artists like Judd tried to omit from their work. And how still, I had to admit, the Judd plywood box nearby had a marvelous grain.

In the bookstore, I looked in vain for a nice edition of Truitt’s published diaries–the entry point into her work for many students and artists who came of age when Truitt’s work was in the critical backseat–that I would ask her to sign for me. With Christmas coming, it might not be proper to intrude on family time, I thought, but wouldn’t it also be a good season to let her know we were thinking of her?

Now I learn she’s gone, and I look back on all the chances I missed to speak with, and listen to an artist I admired very much, and it makes me quite sad.