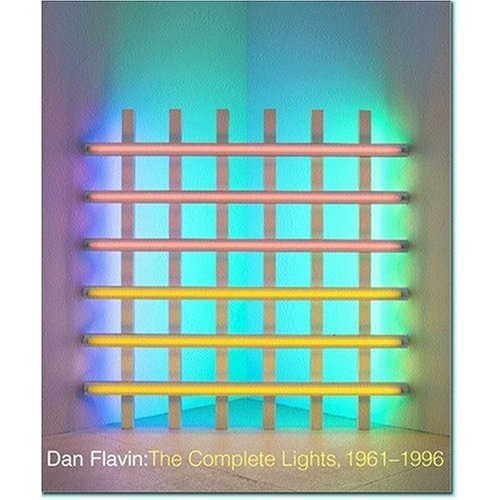 img: Dan Flavin: The Complete Lights, 1961-1996
Stephen Flavin is the only child of Dan Flavin and his first wife, Sonja Severdija. Trained as a filmmaker, Stephen, who lived apart from his father since his parents divorce, began assisting his father’s company, Dan Flavin, Ltd, in 1992. His first efforts–producing the artist’s all-important certificates by computer (previously, they had been variously handwritten or typed) and converting the elaborate and disparate index-card-based inventory of works, which was split among several galleries, to an electronic database–have helped in efforts since his father’s death in 1996 to create a catalogue raisonne of the artist’s work.
Stephen Flavin has overseen the activities of his father’s estate since 1997. He is private and is generally satisfied to have others–such as Steve Morse, the estate’s studio director, or Dia experts such as Michael Govan or Tiffany Bell–speak publicly about Dan Flavin’s work. While my several attempts to contact Stephen before the article’s deadline were unsuccessful, he did call me shortly thereafter and graciously agreed to discuss his experience with the estate, his father’s work, and Dia:

Perhaps the most important decision made for the estate was to close Flavin’s editions and not posthumously produce over 1,700 works that the artist had declared, but which remained unsold at his death. Instead, only work that was certified by the artist in his lifetime would be deemed authentic.
Stephen Flavin: I felt that it would have left things open to what Dan called monkey business. I just could see, you know, a lot of potential for forgery, with people not really knowing what to be looking for as far as an official estate certificate. Even over the years, there are variations in the certificates, so I thought it best to keep it limited to things that had his signature. It’d make things simpler.
On Dia
SF: I felt like I inherited Dia along with the work. It was clear that Dia was going to be a part of my life, because of the relationship, I just needed to establish to what degree. So I kept Michael [Govan, Dia Director] at arms length for a while, but with the catalogue and everything, that’s changed. He’s doing right by the work.
I was aware of my father’s kind of mistrust, or skepticism, so I was really conscious of that at the beginning. But I felt that way from the beginning. Right after he died, I was running paranoid from all these people approaching me for stuff. But over time, it seems that Dia is really becoming the organization to maintain, or to be custodian of the work, and not just my father’s, but the whole generation’s. And I’ve been pretty impressed with what Michael has been doing there.
31 Flavins: on one of the crucial elements of the article, the challenges of adhering to the artist’s intentions after he’s gone.
SF: That gets into an area which Flavin (Judd, Donald’s son, named after Dan, who runs the Judd Foundation) and I always talk about, which is trying to reproduce what you think the artist would want. That I find very daunting. I think [Dia’s Dan Flavin Art Institute in] Bridgehampton is really important because it’s something that Dan put together, and it’s still there.
You know, doing the show I found to be really difficult. There are so many considerations I couldn’t even begin to realize until we were into it. From talking with Dan over the years, I have some understanding of the interaction of the pieces, as far as that goes. But the work can’t be 100% what he would’ve done. There are some instances, like the spiral stairwell, I know he would’ve done something in. But it was an unusual space to work with, so I felt we could’t do anything there; it would require too much interpretation.
We’re like, it’s never going be the same, that’s our feeling. The work is different. You know it’s kind of sad, the only thing you can do is to research what was done as carefully as possible, and work from that. We tried to recreate the Green Gallery space in the show. We couldn’t do it exactly, but I like the idea of getting as much of that into the show, it’s not really open to as much interpretation that way.
On collectors who value original fixtures more highly, and attempts to restore and replace–and, ultimately, keep alive–art made with an inherently temporary/obsolete medium
SF: I’ve been going back and forth on that, and it’s really difficult. My father’s feeling was that they are just off-the-shelf, industrial fixtures, and that they could be replaced. But the market seems to be valuing the older fixtures, and so I’ve had to address that, to acknowledge that. That’s what Sotheby’s did when they appraised the estate; they worked from that understanding, that this is how the collectors felt about the work.
I’m sure Steve [Morse, the estate’s studio director] discussed this; I think we’ve come down to the understanding that if the work can be reconditioned, we do so. Although I am willing to replace a piece if we have the original fixture, and it’s clear the work is irreparable, though of course I’m not going to be able to do that forever.
There’s also a line about the lights going out; they’ll go out and that’s it. it’s something I discuss: maybe we should just let them go out. It was certainly part of his thinking, the transitory nature of things. But he was also always very conscious of his legacy. Despite our record problems, he was careful about keeping records; he always included notes on the back of everything he collected, and his journals were done–this is 1959–in a way that show he started thinking about his place in art history. He was always conscious of it.
I haven’t figured out how to reconcile that, only that my role needs to be to preserve it as best I can while I’m alive, and that I will have to let go of it at some point. I really don’t think the work will be able to be maintained forever, but it will exist then as a record, as a concept. Then, the concept will be more important than the object.
Related: Lights Out: The Dark Side of Success [NYT]
Dan Flavin retrospective, The National Gallery [nga.gov]
Buy Dan Flavin: The Complete Lights at Amazon