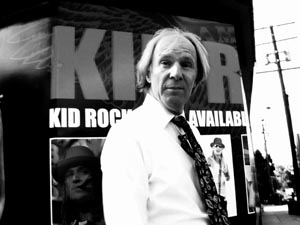 I admit, a lot of Sundance went by me in a blur. No one I knew I knew was showing anything this year, and I knew non-film work would conspire to keep me out of Park City, so maybe I’m the only person who DIDN’T know about New York Doll. Well, in the last week, I’ve heard about it from three different people, each of whom called it one of the top films at the festival.
Greg Whiteley started shooting a documentary about his friend from church, Arthur Kane, when Morissey called [?!] and asked if his old band, the New York Dolls, would reunite and play for the first time in 30 years at the 2004 Meltdown Festival in London.
Turns out Brother Kane, who may be more familiar to rock fans as Killer Kane, joined the Church of Jesus Christ of Latter-Day Saints in the late 80’s, and when Morissey called, he was working in the genealogy library near the LA temple on Santa Monica. Imagining Kane fitting in in the Mormon Church, Blondie drummer Clem Burke said, “It would be like Donny Osmond becoming a New York Doll.”
It also turns out–and this is less of a surprise to music fans–that the New York Dolls were possibly the single greatest influence on glam-rock and punk in the early seventies, and were a key inspiration for everyone from Morissey to Blondie to the Ramones to the Sex Pistols. I’m not giving anything of the film away to point out that the Meltdown reunion–for which Kane dressed, not in feathery glam drag, but in a ruffled shirt inspired by the 19th c. Mormon prophet Joseph Smith, and which featured the three band members who hadn’t died of punk-lifestyle-related causes–was a star-filled, exuberant success. Additional tour dates were hastily set, then just days later, Kane died two hours after being diagnosed with leukemia.
The film includes interviews with the musicians who were inspired by the dolls as well as Kane’s bishop, who talked about the joy Kane was deriving from the upcoming reunion. Whiteley showed some of his rough footage at Kane’s funeral, then edited like crazy to get the film ready for the Sundance screenings last month.
As of right now, the film’s distribution is not decided.
Official Sundance info for New York Doll [sundance.org]
IndieWIRE email interview with director Greg Whiteley [indiewire.com]
Film details Mormon’s final wish: to reunite punk band [reno journal]
New York Dolls play SENSATIONAL comeback show at Meltdown [nme.com]
Arthur Kane, Punk Rock Bassist for New York Dolls, dies at 55 [NYT, via mills.edu]