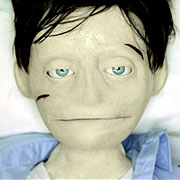 Interpol’s video for “Evil” from their recent album “Antic” was directed by the artist/CG animator Charlie White. It features an Interpol-ish puppet–“pale, thin, with dark hair and a boyish-man quality”–that looks like White’s trademark alien/troll figures in human drag.
MTV.com has some press junket-level technical details of the making of.
Interpol’s ‘Evil’ Is More Like ‘Creepy’ [mtv.com, via fimoculous]
Previously: greg.org on Interpol