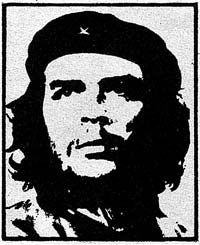 For an exhibition in Dublin, Dutch artist Aleksandra Mir interviews Jim Fitzpatrick, the Irish artist who created the stencil-like poster of Che Guevara. It’s a fascinating story of copyright, revolution, and appropriation, told by someone who’s been largely invisible, even though he made one of the most widely known–and widely copied–images of the last 50 years.
Some interesting tidbits:
– Fitzpatrick originally made 1,000 two-color posters, with the stars hand-colored yellow.
– Several hand-printed early variations–and one painting–made for an exhibition went missing somewhere in Eastern Europe.
– Che was Irish. Irish Argentinean.
– After cutting off negotiations with Fitzpatrick, A US company, Fashion Victim, bought the rights to the underlying picture from the photographer’s heirs and now enforces a trademark–while producing Che clothing in Honduran sweatshops.
– There was an Amsterdam rebel group called ‘The Provos.’
Not everything is always Black or White. [aleksandramir.info]
Jim Fitzpatrick’s website