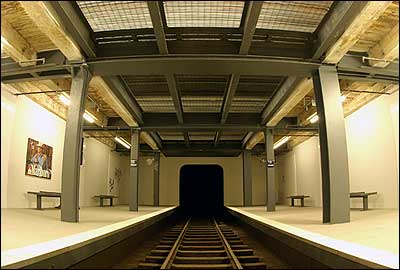 Right after their installation, End Station, opened at the Bohen Foundation (415 West 13th Street, Tu-Sa 12-5), I did a back and forth email interview with Michael Elmgreen and Ingar Dragset for the NY Times. The paper ended up reviewing the installation and not using this piece [I’ll get you, Roberta Smith! And your little– oh, never mind.], so here it is in its entirety, cleaned it up a bit, but with all my essay questions in their full, self-important glory.