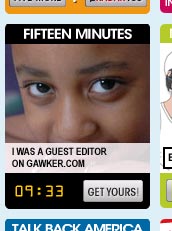 Just as there’s hardly an actor/waiter left in New York who hasn’t made rent by doing a couple day’s work on some Law & Order spin-off or other as an at-first tearful but increasingly suspecious relative or a neighbor who conveniently pins down the time of death by recounting what they were watching on TV, there’s hardly a blogger left in the city who hasn’t had to feign interest in Radar Magazine and cop to a fondness for the hard stuff while doing a “guest-editor” stint at some Gawker Media blog or other.
Forget S.I. Newhouse, Nick’s clearly on his way to becoming the Dick Wolf of the blogosphere, increasingly intdistinguishable spin-offs and all.
Come to think of it, Dickwolfer kinda sounds like a Gawker Media title already. Come to think of it. heh.
Memo to Diane Neal: Who are you again? [gawker.com]
GET YOUR 15 MINUTES! [radarmagazine.com]
Blogging, as in Slogging [nyt on guest-blogging, via gawker, please make me pure.]
[but not yet. 5/18 update with the best disclaimer ever: “(Disclaimer: Everybody involved in the Gawker-Radar spat works for or with everybody else involved, including The Observer.)”]