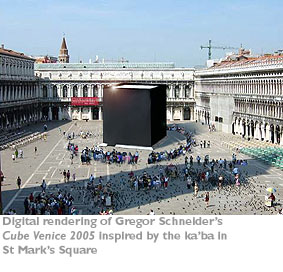 A couple of months ago, I wrote a NYT piece about artists’ unrealized projects. The piece quoted several interviews conducted by the curator Hans Ulrich Obrist, who sees these unrealized projects as under-publicized and under-appreciated aspects of an artist’s work, especially compared to the high level of attention regularly paid to architects’ unbuilt proposals.
Well, Gregor Schneider’s Venice Cube 2005 is one piece that’s getting plenty of publicity. Schneider proposed building a large black cube out of scaffolding and fabric in the Piazza San Marco for the Biennale. It was reminiscent of the Kaba’a, which is at the center of Mecca. The proposal was rejected several times by Italian officials for what they now acknowledge were “political reasons,” to use the artist’s description. Schneider wanted to publish his documentation of the piece and the controversy–including emails between government officials and Biennale organizers, but he was forbidden to do so. His entry consists of six all-black pages in protest.
It would be interesting to see those emails. And to see this story get attention beyond The Art Newspaper, a worthy publication though it is.