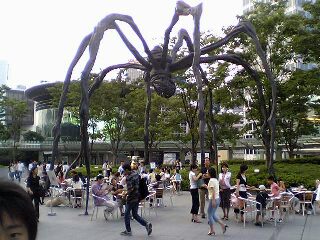 Art is used to lend Roppongi Hills, the massive land grab mall/office complex I’m loving hating these days, cultural credibility. Minoru Mori, the developer, clearly fancies his development is Tokyo’s Rockefeller Center–and, by extension, he’s Japan’s Rockefeller.
At least two pieces of large-scale sculpture that were previously shown at Rock Ctr are currently installed at Roppongi Hills: Takashi Murakami’s Mr. Pointy & co., and Louise Bourgeois’ Maman [above].
Maman was first shown at the Tate Modern’s Turbine Hall. But for some reason, organizers at neither previous venue thought to turn the work into a cafe.