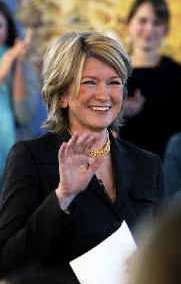 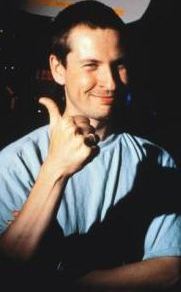 So I was stoking the fires of ill will against Martha Stewart by watching the last half hour of The Apprentice, and I’m thinking, “Damn, but that woman bugs the crap out of me,” and “DAY-UM, but I hate the artificial claptrap of reality TV.” And then I decide to clear my Netflix queue by finally watching The Five Obstructions, and damned if it isn’t The Apprentice – The Lars von Trier Edition.
It’s got everything I hate to hate about reality TV: a smug, annoying, self-annointed omnipotent pseudo-god forcing a supplicant to jump through ridiculous, contrived hoops. Von Trier achieves something I never thought possible: he’s actually more annoying and passive aggressive a control freak than Stewart. [I guess Nicole Kidman and Bjork could’ve told me that; I’ll have to bring it up next time I see them.]
The twist in The Five Obstructions, of course, is that von Trier himself IS the apprentice. His mentor/inspiration/victim is the elder Danish director Jorgen Leth, who must remake his 1967 short film, The Perfect Human five times, each time acceding to von Trier’s intentionally capricious constraints [a cartoon, shot in the most miserable place on earth, no edit over 12 frames, etc.].
And just because Lars is more honest than Martha–in the end, he cops to the fact that, yeah, it IS all about him, always was–it doesn’t mean he’s any less unpleasant.