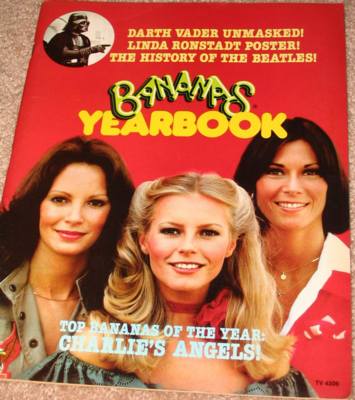 Because it matters FAR more than you know.
You have to be a certain age to remember the shock and confusion of 1977. That was when, just as Farrah postermania had crested, America turned on the TV one Wednesday night, only to find that Jill Munroe had been replaced by her harder, kind of meaner-looking, equally cop [but not, alas, equally hot] cousin Kris. [You cry nepotism? cronyism? family connections? Whatever, Kris did hold down the job longer than Jill ever did.]
It was the most audacious swap out since the whole Two Darrins Affair, and it worked. Once. But the producers got cocky, sloppy, fat and weary, and Charlie’s Angels lost its way. When Leonard Goldberg & Aaron Spelling needed another smart one after Sabrina left, they first tried Tiffany Welles and, inexplicably, Julie Rogers with no success. People had had enough.
It seems totally obvious to me that the incumbency is too valuable an electoral advantage for Karl Rove, the White House’s Aaron Spelling, to pass up. And so the question is not if Dick Cheney will give America another “Waitaminnit, where’s Farrah??” shock, or even when [although it’ll be some time two years-and-a-day from the start of Bush’s second term and the 2008 election, with Plame, torture, spying, impeachment probabilities, and the 2006 election outcome helping a bit.] but who?*
McCain? Rice? Frist [hah]? Graham?
There are two reasons I bring this up now: One was yet another report of Dick Cheney’s health problems. The other was the screening last evening of the most comically bad Bond movie EVER [or at least until the one with Wayne Newton in it] last night on TNT: A View To A Kill, which was notable only for Grace Jones and for proving that, yes, Tanya Roberts could do worse than Sheena and Beastmaster. The last thing America needs right now is a Tanya Roberts presidency.
The Democrats’ big problem is not that, once it gets on the air, a series can almost always manage to push out one viable spinoff: Laverne & Shirley, The Jeffersons, Melrose Place, Frasier. That’s Quayle/Mondale-era thinking. The real problem is if Karl Rove is not Aaron Spelling-evil, but Dick Wolf-evil. As if there wasn’t enough interchangable Law & Orders already.
* well, it ain’t gonna be you, you out-of-touch intellectual seeking to bust me for showin’ my connection with the Amercan people by avoidin’ the use of ‘whom’.