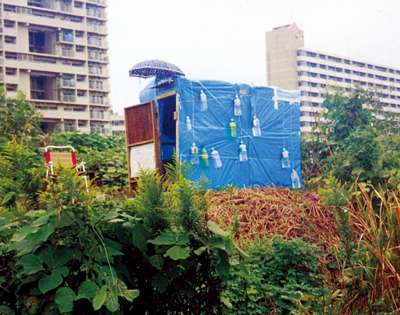 In 2004, Kyohei Sakaguchi published 0 Yen Houses, a book of photographs of street people architecture in Tokyo, Osaka, and Nagoya. A burgeoning urban street population, mostly men in their 50’s and 60’s, is one consequence of the Japanese economic and real estate situation over the last 10-15 years. These men often continue to work, but they’re unable to afford housing, so they improvise their own, squatting on public lands (river banks and parks, mostly). They often form the favelas that preoccupy the nomadic scavenger-artist Tadashi Kawamata [who, after 20+ years of roaming, might be able to come home now that Japan has some, too.]
Police give advance notice when they’re coming to inspect, so the street people are able to move their houses–and then replace them after the police have gone.
This kind of accommodation to the extreme prices and densities of Japan is like a grey market version of Atelier Bow Wow’s study of Pet Architecture, the impossibly tiny structures that inhabit even the most improbably small slivers of land in Tokyo. [On the other end of the spectrum, of course, is Klein Dytham’s Billboard Building, a 2m-wide (at most) spec bldg put up on a former 3-car parking lot in the extremely expensive Hiro-o neighborhood after the road was widened–and the parking lot was rendered unusable.

It turns out that Sakaguchi first gained attention for some video pieces he did while still in college [Waseda U.’s architecture program]. Whether they’re art, documentary, or home movies, who can say, but they seem to fit the jishu eiga/self-made movie mode pretty well. The first, Living in a Water Tank, is just what it sounds like, a video diary of the 21-year-old Sakaguchi’s life inside an unused apartment building rooftop water tank.

Then he made House Biker, in which he cruised around Tokyo on a pimped out pizza delivery scooter with a functioning microhouse on the back. He called it his “O Yen Movie,” a retroactive extension of the new “Zero Yen” brand.
Sakaguchi’s work seems to provoke some embarassment and discomfort among Japanese audiences, but like most things in Japan, it mostly just entertains. Take last year’s Zero Yen House Tour, in which Sakaguchi led a bunch of college students in a contest to build their own shelters using only scavenged materials. If only their plight wasn’t so aesthetically interesting, who knows, they might get some help; but right now, these homeless guys might be too cool for their own good.
0 Yen House, published by Little More and available at amazon-uk [littlemore.co.jp]
0 Yen House Tour, Kyoto Seika Univ. [kyoto-seika.ac.jp]
Happiness is just a riverside shack for designer homeless [timesonline, “designer homeless”?? via archinect]
Sakaguchi Kyohei’s homepage, mostly in Japanese, but there’s a link to autotranslations as well. [kyohei sakaguchi]