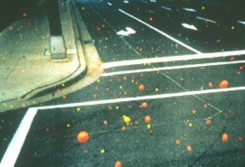 Joel, an eagle-eyed greg.org reader sends in this tip:

Maybe nobody in the history of advertising had thought to do this, but it would appear that an artist had. Lucy Pullen, a Canadian artist living in Victoria, BC, dumped thousands of superballs onto the streets of Halifax in 1997.

Pullen has shown in London and extensively in Canada, too; not that there’s any monopoly on the idea of a mass ball bounce–we once rolled a dozen thrift shop bowling balls down a very long staircase in college in the middle of the night, a wildly ignorant, dangerous thing to do–but still, it’s interesting to see where and how an idea is manifest.
“2500 Superballs,” 1997, Lucy Pullen in collaboration with Sandy Plotnikoff [iamvariable.com]
Previously: the making of Sony Bravia’s bouncing superball ad